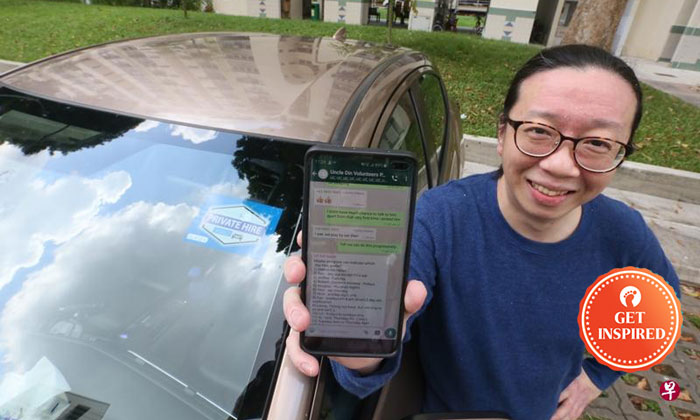 A kind-hearted Grab driver has earned the praise of netizens for rallying other drivers to take turns in giving discounted rides to a disabled elderly guard.

On May 29, Melvin Poh shared on his Facebook page that he had picked up a passenger he now calls Uncle Din at 3.20am from United Square.

"When I arrived, what I saw broke my heart," he wrote.

He saw an old man wearing a security uniform walking slowly to his car with the aid of a walking stick.

He also noticed Uncle Din's fingers were amputated on his right hand.

During the journey, Melvin learned that Uncle Din had suffered two strokes, eight major falls and had been jobless for eight years before a doctor gave him the green light to perform light duties.

During his eight years of being unemployed, he had been certified as permanently disabled but refused to let that stop him from working.

He learned to write with his left hand and built up the strength to walk again.

After many interviews, he finally landed a job as a security guard.

Melvin said Uncle Din told him he earns $65 a day as a night guard but does not receive any transport allowance to go home when he finishes work at 3am.

He books Grab and Gojek rides home as he cannot afford to suffer any more major falls.

He spends up to $30 a day on transport, almost half his salary.

Uncle Din informed Melvin it costs about $14 to $15 to get from United Square to his home at Rivervale Crescent.

Upon hearing this, Melvin offered to pick him up from work for a discounted fare of $10.

"I'm hoping by doing so, I can help lessen his transport expenses a bit so that he can save at least $200 to $300 more for himself every month," he said.

However, Melvin is unable to pick him up every day due to other work commitments so he took to Facebook to seek other drivers who could take turns giving Uncle Din rides home from work for a flat $10 fare per trip.

"A little kindness goes a long way," he said.

He was overwhelmed by the positive response and reactions he has received from netizens. 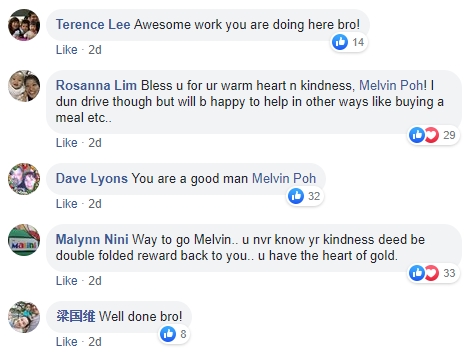 "A drivers' group chat has been formed and there are currently around 28 drivers in the group, including myself, committed to fetching him," he said.

"Every one of us will take turns to fetch him."

People have been sending him donations to give to Uncle Din and he has received a total of $180.

However, he stopped collecting them after Uncle Din expressed he was not keen on collecting donations from the public.

He said he will use the money to pay for Uncle Din's ride fares instead.