Kind guy who 'tompang' stranded biker gets Stomp 'Goody Bag': 'I thought TP will saman me' 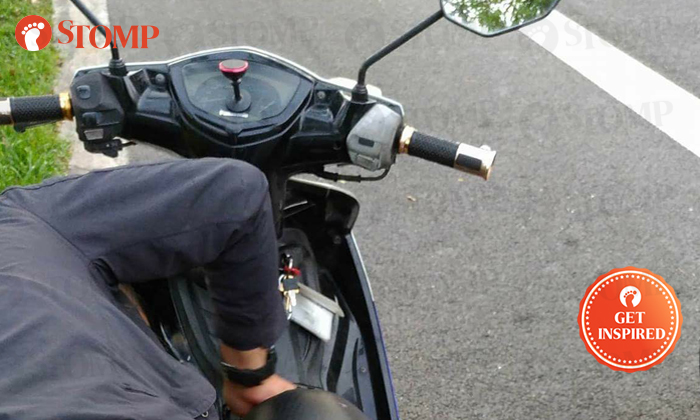 When Muhammad Fithri stepped into the Singapore Press Holdings (SPH) building to collect a token of appreciation from Stomp, his first question to a journalist was, “But why is this so viral ah?” while wearing a baffled expression.

He was referring to an incident on June 23, in which he aided a motorcyclist whose bike had broken down on the Pan-Island Expressway (PIE).

The 33-year-old, who works in the IT sector, also shared an account of what happened on the Singapore Police Force (SPF)’s Facebook page. His post, which was featured on Stomp, has since garnered over 9,400 likes and more than 1,100 shares.

Fithri was on his way home from work at Paya Lebar to Boon Lay at around 6.30pm, when he spotted the Malaysian biker stranded by the road shoulder after the Bukit Batok East exit.

He then approached the motorcyclist and offered his help.

Using tools from Fithri, who was riding a scooter, the motorcyclist identified the problem with his bike: A snapped throttle cable.

Fithri told Stomp in an exclusive interview, "He was like a pro, opening the oil compartment area and swiftly finding the problem, so I assumed he knew what he was doing.

"I asked if he needed a towing service, but he said he had just started work in Singapore and hasn't gotten his salary."

Refusing to leave the stranger in the lurch, Fithri gave him a lift to the nearest workshop, Sports Motor Pte Ltd, at Bukit Batok Crescent, to purchase the parts needed to fix the bike.

The two, who conversed in Malay, then returned to the bike, which the motorcyclist started to fix.

Although the motorcyclist told Fithri to return home and break fast first, the latter declined and offered to stay and act as a translator in case anything happened.

That was when a police officer, whom SPF has since identified as Station Inspector (SI) Tan Keng Yeow from the Traffic Police Patrol unit, pulled up in a patrol car.

"I thought I was going to get saman because my scooter had no problems but was parked on the road shoulder."

However, SI Tan had stopped for a completely different reason: To offer his assistance.

Fithri continued: "A second police car with two officers also stopped. They all told me to just call for towing services and go home to break fast first. The two officers then left shortly after as they had to attend to a case."

What SI Tan, did, however, left a lasting impression on Fithri.

Fithri told Stomp, "He did not just sit in his car, but instead, stood outside his vehicle to ensure our safety all the way until we were done fixing the bike.

"He talked about a chain collision in Woodlands and wanted to prevent that, as well as protect us from oncoming traffic.

"I feel that he was very sincere in helping and going the extra mile, especially since he was alone. There was nobody like his colleagues and superiors around for him to 'wayang'."

Asked about the attention that he has received after his post went viral, Fithri said it was "quite shocking" and noted how "Stomp is quite fast" in contacting him.

He added, "Actually, the only reason I made the Facebook post was to highlight the Station Inspector’s actions to the SPF and not because of me."

For his heartwarming deed, Stomp presented Fithri with a Goody Bag as we believe that every act of kindness deserves to be recognised, no matter how small.

He also shared with Stomp how he chose to lend a helping hand because he could "feel the hardship of bikers", after having been stranded in Johor Bahru at 3am just two weeks ago.

"Getting stranded in a foreign country, it’s very suay."

For anyone who might find themselves in similar situations or come across others in need, Fithri has wise advice.

"If you are not in a rush and have extra time to spare, help. If you are alone, dinner a bit late, never mind, 'botaiji' (meaning 'no biggie' in Hokkien).