Kind driver gets down bus to help passengers with pram, gives sweet to child 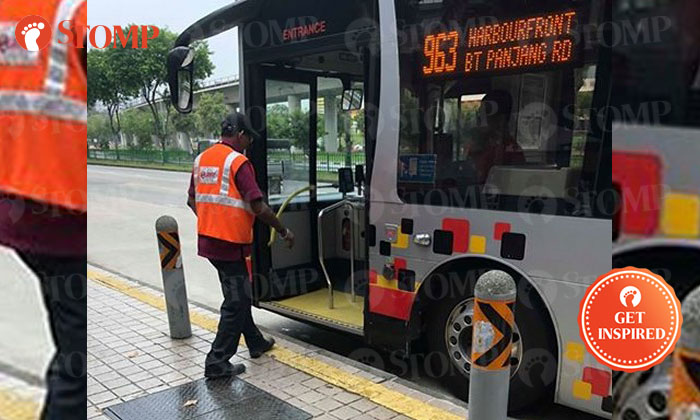 A bus driver was seen helping a couple carry their stroller to board another bus on Sep 22 at 4.30pm, at the bus stop opposite Marsiling Mall.

Stomper Ms Kai was at the bus stop opposite Marsiling Mall when she saw a friendly bus driver helping two passengers with their pram.

The driver of bus service 963 was seen alighting his bus to help a couple board the bus in front.

Ms Kai tells Stomp: "I actually saw two of the passengers in front trying to board via the second door with their pram. He went all the way down to help them. When the front bus moved off, he stopped, alighted and passed the sweet to a small passenger who was sitting at the bus stop. Such a nice gesture."

The couple were struggling to get on the bus because of a child in the stroller.

After helping the couple and watching the bus move off, he offered another girl at the bus stop a sweet.

Ms Kai said: "I was surprised because the driver really went the extra mile. I'm sure it brightened up the passengers' day."