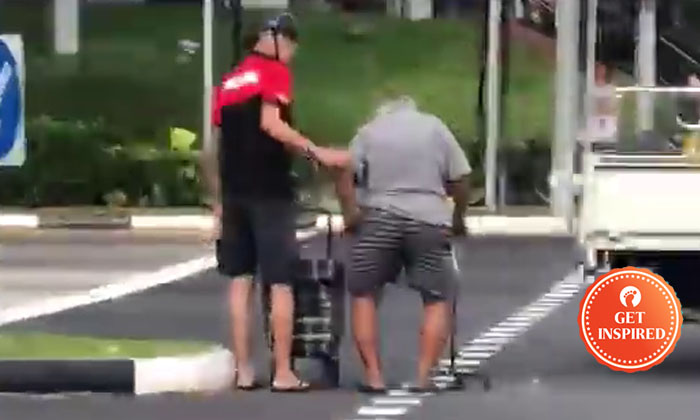 A kind biker was spotted helping an elderly man to cross the road at the junction along Yishun Avenue 2 at around 4.30pm on Wednesday (Sep 5).

In a video posted to Facebook page SG Road Vigilante, a man wearing a helmet is seen pushing a shopping trolley and stopping oncoming vehicles while an elderly man with a walking stick holds on to him for support.

The pair is slowly crossing the road in the middle of a traffic junction.

A stationary motorcycle, believed to belong to the man, can be seen parked at the side of the road.

The video has garnered many positive reactions from netizens on Facebook.

Many have come forward to leave comments and give kudos to the man.

"Him and his dad owns a bike shop in Yishun Industrial Park.

"They are very very good mechanics, and very honest too!

"Let's show some love to them!"

"I knew this guy, and his father too.

"Both are very humble!"

According to The Straits Times, the man has been identified as 25-year-old Reyco Chai.

Mr Chai was riding on his way to his motorcycle workshop in Yishun Industrial Park when he noticed the man crossing the road.

It was then that he immediately stopped his motorcycle at the roadside to render his assistance to the elderly man.

He had to stop oncoming traffic so that the elderly man could safely cross the road as he could not walk fast.

"He was already crossing the road and from his speed, I knew he could not make it," said Mr Chai.

"I was afraid that vehicles might not stop for him when he was crossing."

"This is the kind of thing that you just do and you feel good in your heart," he said.