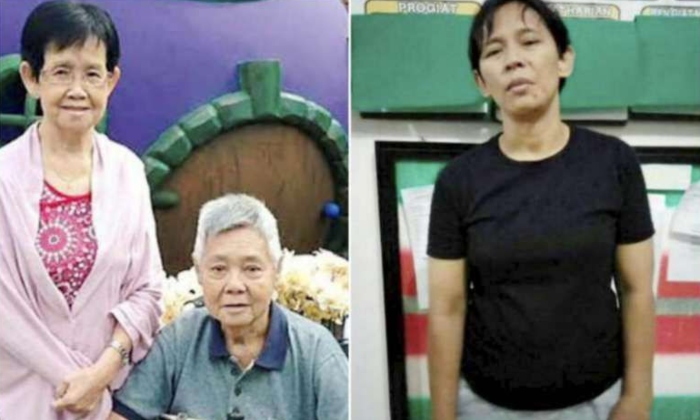 An Indonesian maid who killed an elderly couple in 2017 claimed she had only wanted to run away, and that the double murders happened during a scuffle.

Khasanah, who is from Java, said when Mr Chia Ngim Fong started bleeding, she panicked and used a stool to hit the 79-year-old in the head. When his wife confronted the maid, Khasanah pushed the 78-year-old onto the floor and stomped on Madam Chin Sek Fah repeatedly until she went quiet.

The details were revealed on Wednesday (Sept 2) in a coroner’s inquiry into the deaths of the elderly couple. The maid was arrested in Indonesia a week after the double murder.

State Coroner Kamala Ponnampalam said Khasanah, who was 41 at the time, had decided to leave for Batam on June 21, 2017, after spotting her passport in a cupboard in the couple’s maisonette flat at Block 717, Bedok Reservoir Road.

She said she did not like being scolded by Madam Chin.

In her escape plans, Khasanah, who was 41 then, decided she had to restrain the couple  and cover their mouths with duct tape  to prevent them from stopping her.

When she went into Mr Chia’s bedroom, she found him sleeping on a bed.

State Coroner Kamala said: “She went up to Mr Chia, held his hands and pasted the duct tape over his mouth. She started to tie his hands with the raffia string.

“Mr Chia woke up and began to struggle. The duct tape covering his mouth came loose and he began to scream. Khasanah turned on the television to drown out his screams. She used her fists to punch him in the face.”

When she saw Mr Chia bleeding during the struggle, she panicked. She then picked up a wooden stool and used it to repeatedly hit his head.

When Madam Chin confronted Khasanah soon after, the maid pushed her, which caused the elderly woman to fall onto the floor.

“Khasanah tied Madam Chin’s hands and legs with the raffia string and anchored the strings to the towel railing in the bathroom.

“When she saw Madam Chin continuing to struggle, Khasanah stepped on Madam Chin’s body several times while holding on to the bathroom sink, until Madam Chin lay motionless on the floor,” said State Coroner Kamala.

The maid then left the flat after taking her passport and some of her victims’ valuables.

In her findings on Wednesday, State Coroner Kamala said the incident was one of unlawful killing perpetrated by Khasanah.

The maid went on trial in Indonesia  between Feb 27 and May 2, 2018. She was later convicted of the murders and sentenced to life imprisonment but it was reduced to 20 years’ jail on appeal.

Investigations showed that she left for Indonesia via ferry from HarbourFront Centre at 1.20pm on the day of the incident.  She also took some items belonging to the couple.

Khasanah was in an Internet cafe in Indonesia when she was overheard talking to somebody over the phone about her offences.

Indonesian police were alerted and on June 28, 2017, she was arrested in Tungkal Ilir, in Jambi province in Sumatra after police raided her room at Hotel Nanber. Tungkal Ilir is a town in West Tanjung Jabung, about a three-hour drive from provincial capital Jambi and more than 300km from Singapore.

Among the items found in her possession were several pieces of jewellery, watches, mobile phones, a laptop computer and cash amounting to no more than $300 in various currencies.

Khasanah was not handed over to the authorities in Singapore even though her offences were committed here. Instead, the Indonesian national police worked with the Singapore Police Force to solve the crime, The Straits Times previously reported.

Khasanah was not sent to Singapore due to the principle of personaliteit, which requires any Indonesian arrested in the country for a crime committed overseas to be processed in Indonesia instead of being sent to the jurisdiction where the offence took place.

The Straits Times visited the couple’s home on Tuesday night. A man who was at the unit politely declined comment when approached.

Neighbours said the couple have at least one son who continues to live in the flat. Ms Wahidah Haron, a housewife in her 50s who has lived in the block for more than 20 years, described the couple as being gentle and considerate.

Mr Alif Yahya, 25, recalled the couple would smile and greet neighbours as they sat in their usual spot on a bench at the void deck.

The Singapore Management University student said they smiled at him and his friends as they played football near the void deck when they were in primary school.

“I never thought a murder would happen in this area because it’s so peaceful and safe here,” he said, adding that he was unaware the couple had hired a maid.