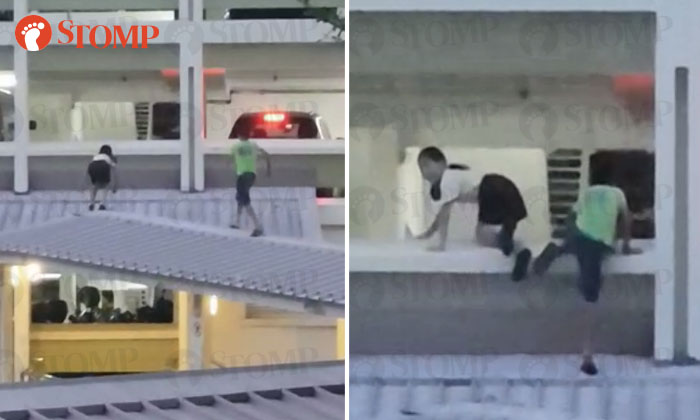 Two kids were caught on camera walking dangerously on the roof of a sheltered walkway near Kang Ching Road in Jurong West on Friday (Jan 4).

A Stomper witnessed the incident after visiting a resident of the area with his nine-year-old daughter at about 7pm.

He said: "My daughter had seen the two children first and called out to me.

"She pointed at the two kids and said they were walking along the shelter."

The Stomper then took out his phone to record the incident.

In the video, one boy and one girl can be seen walking freely on the shelter.

Then, the boy notices the Stomper filming with his phone.

He runs towards the second storey of a carpark and alerts the girl, who is the near a parapet of the building.

Both of them hop onto the parapet of the second floor and disappear into the carpark.

The Stomper said: "I was worried and saddened by the fact that their parents did not know what they were doing.

"They seem to be about my daughter's age, and she knew that what they were doing was dangerous."