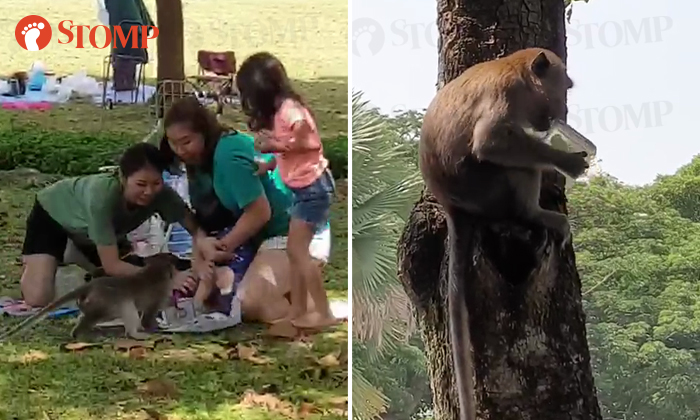 A monkey gatecrashed a picnic at West Coast Park and made off with a box of grapes, leaving children in shock and tears.

Stomper Lim took a video of the incident that occurred on Saturday (Feb 27).

In the video, a monkey can be seen approaching a group of two women and two young children who were having a picnic on the grass.

The monkey then snatched a Tupperware - which contained grapes, according to Lim - and fled, before climbing up a tree.

Screams and cries from the children can be heard as the monkey is seen trying to open the Tupperware.

Lim told Stomp: "The monkey made one of the children cry.

"It managed to open the Tupperware and took a few grapes inside the box. The entire Tupperware then fell down.

"The sight was amusing but at the same time, I am worried that the monkey might hurt children. I always bring my kids to West Coast Park, but this is the first time I have seen a monkey there."

Here's what to do when monkeys approach you in the open, according to the National Parks Board (NParks) website: