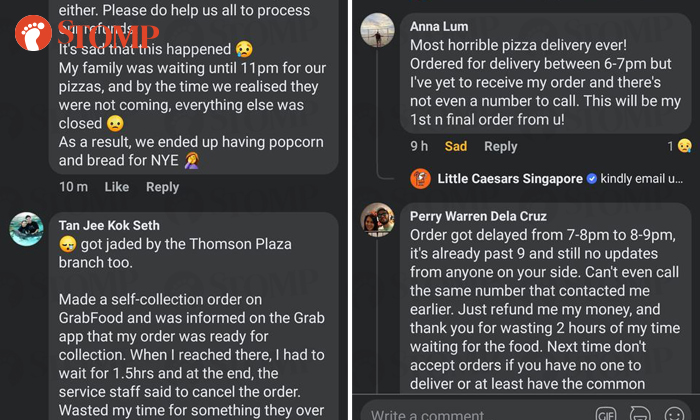 A pizza restaurant has come under fire in yet another incident of overwhelming orders going unfulfilled during the festive period.

Hoping for a memorable birthday party for her eight-year-old-son and New Year's Eve celebration for her household, Stomper Carol placed an order with Little Caesars Pizza well in advance on December 18.

The order, which amounted to over $72, consisted of pizzas and sides for five adults and seven children from Carol's and her sister's families.

The delivery was set for December 31, between 6pm and 7pm.

Carol told Stomp: "But nothing was delivered, ever.

"I didn't receive any updates via SMS/phone call/email either. So after the 7pm delivery time-slot passed, I checked Little Caesars Pizza's website for a phone number to call.

"To my horror, there wasn't any phone number stated. Instead, customers were told, as the website states, to either email or use the website chatbot.

"So, I sent a message with my order number through the chatbot to ask for the delivery status and estimated arrival time for my food order.

"But after a few automated messages asking for factual info like my order number, the chatbot went all silent on me for the rest of the night.

"As I wasn't getting any response from the chatbot, I went to check their Facebook page.

"That was when my shock grew as I realised that Little Caesars Pizza had also screwed up orders on Christmas Eve, and that there were many other angry and hungry customers like me on New Year's Eve.

"Many of us, including myself, left repeated messages on their chat and Facebook page."

Carol's woes continued with a lack of food and customer support.

She recounted: "I also sent them an email on the same evening at around 7pm.

"But I got radio silence all the way until 22 minutes into the new year on January 1, when they replied to one of my Facebook comments asking me to email them, which I already did four hours ago. But obviously they weren't even checking their emails.

"So in other words, we were left stranded without dinner for hours and without any news, until we had no choice but to resort to da-baoing fishball noodles from the nearby kopitiam because that stall had the shortest queue, plus my mum was really fed-up and the children were really hungry by then.

"My children, especially the birthday boy, were terribly disappointed that there were no pizzas. But it was already late on New Year's Eve and I wasn't going to risk another long queue for food from another place. Everywhere was also packed.

"After I received the cookie cutter copy-pasted message at Jan 1, at 12.22am, which Little Caesars Pizza sent to every customer who had complained on their Facebook page (mind you, the message had zero word of apology and showed no sense of regret nor remorse for the great ordeal and inconvenience caused to all of us and our families), I didn't hear from them for the next two days. Yup, no Facebook replies on the post nor via a private message. And still no reply to my email on December 31.

"So I sent a couple more email chasers. The last straw was me posting another message on Jan 2, at 10.28pm, on Little Caesars Pizza's Facebook page where I said I would report them to CASE if I did not hear from them by noon n the status of my refund.

"That finally got their attention and got them to act and respond to me. I got an SMS from them on January 3 with this crytic short message. 'Your order #xxxxx from Little Caesars Pizza has been refunded for $72.56.'

"There was still no word of apology, and no idea by when or how the refund would be made. So I sent another email on Monday afternoon (Jan 4) at 2pm to ask about these.

"I received a reply saying the refund would go back to my credit card account. And then some time later, I also got a phone call, presumably from their customer service, that the refund would take four or five working days.

"I took the opportunity to ask the staff, now that I finally had a real human being on the phone, what was the reason for the non-delivery.

"She immediately told me they had problems getting enough delivery guys to send orders on New Year's Eve because they had used a third-party delivery service provider.

"But having already read through every single complaint left by other customers on Little Caesars Pizza's Facebook page, I already knew which delivery company they used.

"I came across a customer who said on Facebook that he was called up by the delivery guy, who apologised for the late delivery because he had been waiting for more than an hour at one of Little Caesars Pizza's outlets as the pizzas were still not ready for delivery.

"There was also a complaint from another customer who had ordered pizzas from Little Caesars Pizza via a food delivery platform and and opted for self-collection. But he was also kept waiting for more than 1.5 hours at the outlet until finally the service staff advised him to cancel his order and buy some other food elsewhere."

In response to a Stomp query, a spokesman for Little Caesars Pizza said: "Due to overwhelming orders over the festive period, there were some delivery orders which were unfortunately not fulfilled.

"We have since reached out to the affected customers to ensure that they are refunded for these orders."

Customers can also reach out to Little Caesars Pizza at catering@ptig.email to check on the status of their refunds, shared the spokesman.

Carol said that the non-delivery "spoiled the entire evening" for her family which no refund could ever undo.

She added: "I was really upset that Little Caesars Pizza ruined the family gathering and birthday celebration we had planned.

"It was the first time in 10 months that my extended family of 12 could finally gather under one roof, so it was a really important occasion for us.

"At the end of the day, every F&B order and every mealtime is an experience. For an important festive occasion like New Year's Eve, it is all the more about celebrating special moments with our loved ones.

"Little Caesars Pizza can make refunds post-incident, but that is really besides the point. That is only their obligation for non-delivery.

"The refund doesn't even make up for the marred experience and lost time for each and every one of their customers whom they put through the ordeal. We have lost faith in their brand."