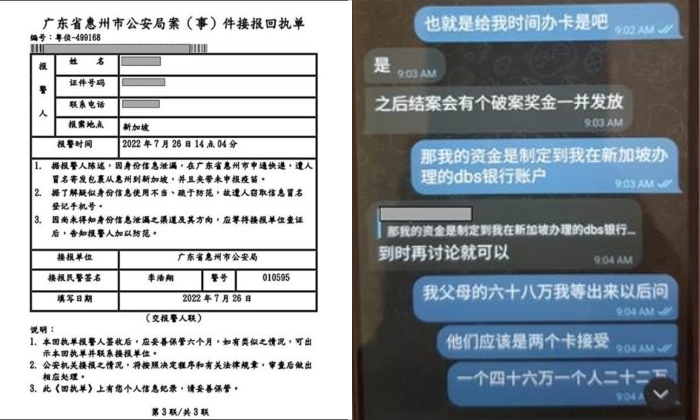 It starts with a phone call supposedly from the Ministry of Health (MOH).

The police call it the China Officials Impersonation Scam.

What happened was the victim received an unsolicited call from a scammer who claimed to be an officer from MOH in Singapore about a month ago, said police.

The victim’s phone call was later redirected to a scammer purportedly claiming to be a police officer from China.

The scammer alleged that the victim’s particulars were used to open a bank account involved in money laundering activities in China and later deceived the victim into transferring more than $200,000 as “bail money” to bank accounts provided by the scammer.

Acting on the scammer’s instructions, the victim recorded a video of himself to assist in the purported investigations.

Without the victim’s knowledge, the scammer sent the video to the victim’s parents in China and demanded a ransom to be paid for his release.

The police received a report on Aug 23 that a 24-year-old man had allegedly been kidnapped.

Officers from the Clementi Police Division, Criminal Investigation Department, Police Intelligence Department and Commercial Affairs Department conducted extensive searches and investigations to locate the victim who was eventually found to be safe and sound in the vicinity of Geylang Road within five hours of police report.

Preliminary investigations revealed that a 58-year-old man had acted on the scammer’s instructions to book hotel rooms for the victim and hand a mobile phone with a SIM card to the victim for the victim’s communication with the scammer.

The man was arrested.

The police said they take a serious view against any person who may be involved in scams, whether knowingly or unwittingly, and they would be dealt with severely in accordance with the law.

The police added that the China police, Interpol and other overseas law enforcement agencies have no jurisdiction to conduct operations in Singapore, arrest anyone or ask you to help with any form of investigations without the approval of the Singapore Government.

You are advised to take the following precautions when you receive unsolicited calls, especially from unknown parties and those with the “+” prefix which originate overseas: