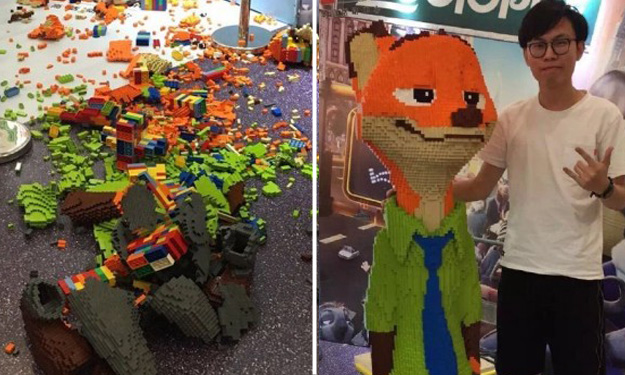 It seems like sculptures do not have a very good shelf life recently in China.

Just days after a kid broke an angel glass sculpture in a Shanghai museum, another destroyed a LEGO sculpture at the expo in Ningbo.

According to Mashable, the young boy destroyed the giant fox sculpture of Nick from Zootopia -- just one hour after the exhibit opened.

It was the first day of the exhibition and the display had been open to the public for no more than an hour when the incident occurred.

The artist Zhao had spent three days and nights painstakingly piecing together the figurine. He said that the parents were very apologetic over the mishap.

Zhao declined compensation as he insisted the child did not mean to break the figurine.

The artist went on to post pictures of the broken figurine on his Weibo account, but did not elaborate about what had happened except to say he was heartbroken to see his hard work destroyed