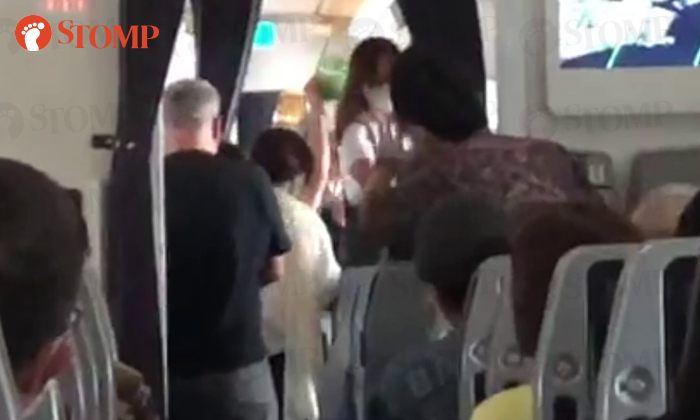 Staying seated until the plane has safely landed and you are given the green light to remove your seat belts seems like a simple instruction, right?

Clearly not for a handful of passengers in the premium economy cabin on a Singapore Airlines (SIA) flight.

Stomper Chan was irked upon witnessing the group's behaviour on a flight from Bangkok to Singapore on Tuesday afternoon (Aug 23), at around 4.15pm.

Chan said: "A group of Singaporeans started removing their baggage from the overhead compartment while the plane was taxiing on the runway to the gate, when everyone else including flight crew were still belted in their seats."

A video from the Stomper shows several passengers standing up and retrieving their luggage as a flight stewardess tried telling them to stay seated.

Repeated instructions of "Please take a seat," can be heard, while a man is heard saying, "All those Singaporeans."

Chan told Stomp: "These 'premium passengers' were in such a hurry to get off a moving plane.

"When cabin crew saw what was going on, they loudly told the passengers to settle down and asked them to get back to their seats.

"It's my first time seeing such behaviour on a flight. I was shocked at the passengers' impatience and flagrant breaking of rules."

According to SIA's website, necessary measures may be taken against passengers who endanger the aircraft or anyone on board, behave in an offensive manner, or fail to comply with instructions from the crew.

For more info about proper conduct aboard aircraft, check out SIA's conditions of carriage here.