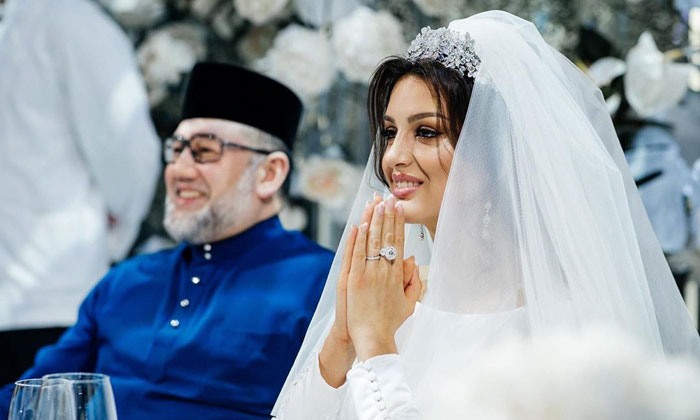 The Russian ex-beauty queen who is reported to have been divorced by former Malaysian King, Sultan Muhammad V of Kelantan, after a whirlwind romance, has shared a video on Instagram revealing intimate details of their relationship.

In the video posted on Wednesday, Ms Oksana Voevodina, 27, says: "I will take care of him and, of course, I want to be the last person in his life, and I want to live with him until the end of my life."

It is not clear when and where the video was filmed, but as of yesterday morning, it had garnered more than 195,000 views and over 1,500 comments.

Interest in the couple's lives has spiked amid recent reports of a leaked certificate showing that their divorce was finalised on July 1.

The certificate, which bears the Kelantan state crest and is marked as the wife's copy, indicates that the divorce was done through the utterance of the word "talak" three times - the most severe and irreversible form of divorce in Islam.

The date of the divorce was listed as June 22, and it was marked as having taken place in Singapore.

The news comes barely two months after the birth of the couple's son, Ismail Leon, and about a year after the pair's surprise marriage in Moscow.

Sultan Muhammad V, 49, speaking in the Instagram video, lists children as their family's "priority No. 1, because the children carry on your legacy".

He also says that although he and Ms Voevodina, a former Miss Moscow, do not share many hobbies, "there is a lot of understanding".

The former king has made few public appearances since he stepped down on Jan 6, becoming the first monarch in the country's history to abdicate. He ascended the throne in December 2016 and was meant to serve for five years, under a rotating monarchy system shared by the nine royal households in Malaysia.

Royal observers have said that speculation about his marriage to Ms Voevodina was a factor in his abdication.

Earlier, Kelantan's deputy chief minister denied any knowledge of the split, the New Straits Times reported. On Wednesday, the Daily Mail UK quoted Ms Voevodina's lawyer Evgeny Tarlo as saying: "Oksana married for love and is still married." He said he did not receive any official paperwork on the end of her marriage to Sultan Muhammad V, though he indicated that the relationship could be on the rocks, the newspaper reported.

He said: "Divorce is just talk from a yellowish (scandalous) media. We have no official papers. We do not know anything."

Meanwhile, sources close to Ms Voevodina said she is staying with her son and mother, Lyudmila, 48, in a country house near Moscow.

Mr Tarlo said Sultan Muhammad V is providing for her expenses, including the rental of an apartment and the country house.