'Karen' argues with FairPrice staff, accuses man of opening cream: 'Please do not act like an animal' 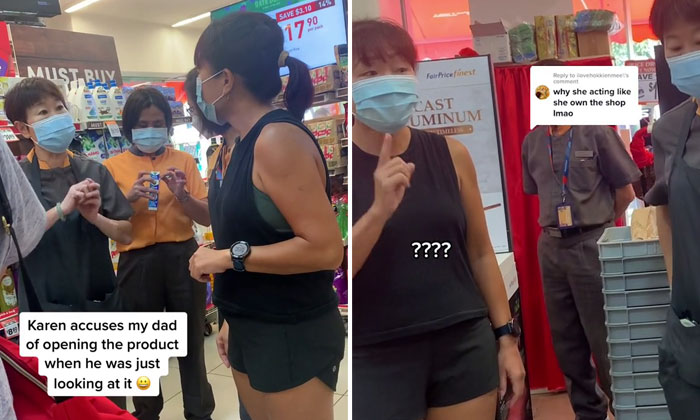 A woman was caught on video arguing with FairPrice Finest staff after allegedly accusing a man of opening a product in the supermarket.

The video of the incident was posted on TikTok on Monday (Apr 11) and showed a woman talking to the supermarket's staff.

The TikTok user said the woman, whom he called a "Karen", claimed his father had opened a sealed product.

She then allegedly got the attention of the supermarket's staff to resolve the issue. It was not revealed which outlet this happened at.

One staffer is heard telling the woman: "According to what the man said, the cap or seal was already not sealed up."

The woman then shot back, while gesturing at products in the background: "So, all these things, if they are not sealed up, can just open them, is it? Are you telling me that?"

As three FairPrice staffers continue to reason with the woman, another lady is heard saying, "I got the whole day".

She then mentions calling the police. The TikTok user said the woman then walked away.

In a video that has since been taken down, the TikTok user explained that the product was a bottle of Vicks cream and the woman allegedly told his father off, saying she could smell the product.

The situation apparently escalated when the woman called his father "uncivilised" and an "animal".

She is heard saying in another video: "When I say 'please do not act like an animal', that's not an outright profanity. Go talk to a lawyer."

In the end, the FairPrice staff kept the product and told the user and his father not to pay for it.

Related Stories
Man with 'knee problem' scolds commuter who told him not to put feet up on bus seat
Grab rider rams into pedestrian from behind, says he rang bell and she should have moved
Woman and son spend night in stairwell after landlord locks them out of Yishun flat
More About:
argument
dispute
FairPrice
supermarket
rude
TikTok