Karang guni man on trial for murder after 'revenge attack' in Geylang says: "I did not kill anyone" 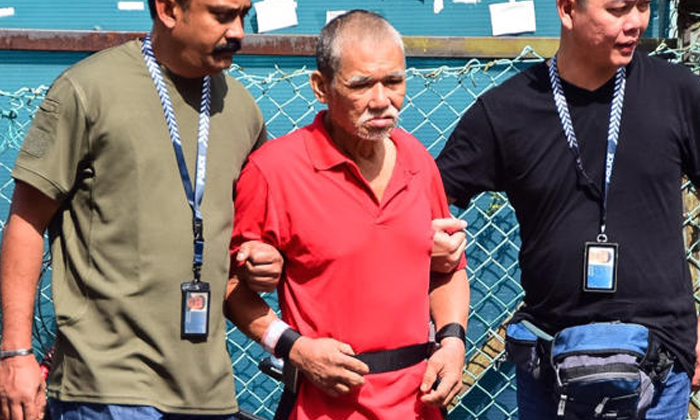 A confrontation between two men at a Geylang coffee shop escalated into a fight that ended with rag-and-bone man Toh Sia Guan running away from the scene and losing a slipper in his retreat.

Toh, 64, then went straight to a nearby budget shop, bought a pair of slippers and a knife.

Toh rushed towards the younger man, sparking a second fight that ended with Mr Goh being knifed multiple times, including a fatal stab wound on his upper arm that went through a major blood vessel.

Both fights were partly captured on closed-circuit television (CCTV) footage on the morning of July 9, 2016.

On Tuesday (Aug 6), Toh, now 67, went on trial in the High Court to contest a charge of murdering Mr Goh at the coffee shop at Lorong 23 Geylang.

If convicted, he faces life imprisonment or the death sentence.

"I did not kill anyone," he said in court in Mandarin.

Prosecutors, however, contend that from the circumstances leading up to the second fight, CCTV footage and medical evidence, it was clear that Toh had intended to stab Mr Goh.

This included intentionally inflicting the fatal wound, which was sufficient in the ordinary course of nature to cause death.

"This was a vicious and violent revenge attack with a knife, which resulted in death," said the opening statement of the prosecution, led by Deputy Public Prosecutor Eugene Lee.

Numerous surveillance video clips were played in court, including footage showing a limited view of the two fights and Toh buying the slippers and knife at the budget shop.

The court heard that both men frequented the Geylang area.

On the morning of July 9 that year, Toh stopped his bicycle outside the Geylang coffee shop and felt that Mr Goh, who was having breakfast inside, was staring at him.

When Toh asked Mr Goh if he was selling Chinese medicine, the younger man shouted vulgarities and retorted along the lines of "do I look like a drug peddler?".

At the time, Mr Goh was on the phone with a friend, who heard part of the exchange.

Toh then got down from his bike and the two men came to blows.

During the one-minute fight, Mr Goh used Toh's own bike to hit him. Toh retaliated by hitting the back of Mr Goh's head with a wooden stick he grabbed from a parked lorry.

But Toh lost his grip on the stick, and both men traded blows with their bare hands, before the older man fled the scene.

After the fight, Mr Goh went to a back alley to clean himself up with a towel and water, spoke to his friend on the phone, and walked back to the main road of Lorong 23 Geylang.

But Toh returned armed with a knife and charged towards Mr Goh, who picked up the stick from the earlier fight.

Mr Goh was stabbed in the right upper arm, the scalp, and the chest. His face was also sliced and his hands were cut when he tried to defend himself from the knife attack.

The fight lasted two minutes, and Toh left the scene with his shirt stained with blood and again with only one slipper, on his left foot.

He took off his shirt, put on one he took from a clothesline, and went to a supermarket at Boon Keng Road to buy another pair of slippers.

Meanwhile, Mr Goh laid down on the road and rested his head on the kerb, while passers-by called for the police and ambulance. He was pronounced dead at the scene by paramedics.

The knife, with a 14.5cm-long blade, was recovered at the scene, sheathed in its plastic cover.

An autopsy found that Mr Goh bled to death from the stab wound to his arm which went through the brachial artery and cut the basilic vein.

Toh was arrested 12 days later on July 21 at Labrador Park MRT station after the police received a tip-off that he had been sighted nearby.

He admitted that he evaded police detection by seeking shelter under a bridge near the Bendemeer area.

He initially confessed to stabbing Mr Goh in the stomach but later omitted this in his police statements.

Toh, who is defended by assigned lawyer Wong Seow Pin, is likely to argue that he did not inflict the fatal wound, did not have the intention to cause the fatal wound, or was acting in self defence.

However, the prosecution contends that these defences are "unsustainable".