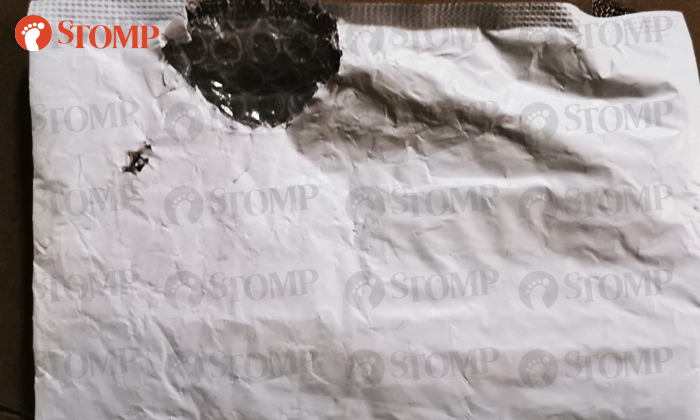 A resident in Jurong West was dismayed when he opened his letterbox and found an empty parcel with torn packaging last month.

To date, the resident at Block 674A Jurong West Street 65 has no idea what the parcel is supposed to contain.

Stomper Tim said that he had opened his letterbox at around 1pm on Oct 15 when he made the unusual discovery.

He told Stomp: "When I opened my letterbox, the parcel's packaging already had a hole and the item was missing. I'm not sure what it was supposed to contain other than it had my name on it."

In response to a Stomp query, a SingPost spokesman said that the postman in charge of the delivery did not see or handle any damaged items during the shift.

The spokesman said: "SingPost was alerted to the incident on Oct 15 and we thank the resident for bringing this to our attention.

"SingPost has strict procedures for our postmen when they come across damaged mail items during the course of their deliveries. Postmen are required to report damaged items, which will be repacked before delivery to ensure the safety of the contents.

"In this instance, the postman in charge of the delivery did not see nor handle any damaged items during her shift."

According to the spokesman, SingPost has since contacted the resident and apologised for any inconvenience caused arising from the incident.

"We have also explained to the resident our procedure in handling damaged mail items and reassure that our postmen adhere to these processes," added the spokesman.