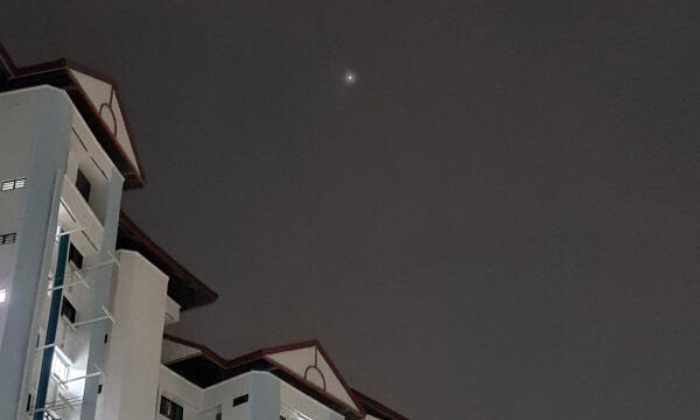 When night fell on Sept 23, about 15 members of The Astronomical Society of Singapore (Tasos) turned up in Bukit Batok Nature Park, filled with bright hopes of tracking giant planet Jupiter in the sky.

But, at 8pm, it was cloudy and data scientist Koh Wee Ming, 37, did not pull out his 1.8kg telescope. He knew that under poor weather conditions, Jupiter would appear as only an undistinguished brown orb.

When the skies cleared up around 11pm, showtime started for Dr Koh, who got to see more of the gas giant's features than he expected.

He could easily marvel at Jupiter's largest four moons, the planet's signature stripes, and enjoy a clearer view of its iconic Great Red Spot - an enduring storm which is larger than the size of Earth.

"I was so fascinated by how brighter and clearer Jupiter was than usual," he said.

His "date" with Jupiter turned out well because had he caught the largest planet in the solar system four days before it reached its closest approach to Earth in almost 60 years.

This phenomenon after 3.15am on Sept 27 is called Jupiter's Opposition, where the planet sits directly opposite the sun, with Earth in between. It appears as though the three are in a single line in space.

During the opposition period, Jupiter will be closer to Earth than any other time of the year, with the planet appearing larger and brighter.

While Jupiter's Opposition is fairly common and happens every 13 months, this year's event was extra special, because the planet made its closest approach to Earth since 1963.

This meant that through a telescope, Jupiter's features - such as its bands and swirls - would appear sharper.

Mr Albert Lim, 63, a committee member and former president of Tasos, said while Jupiter can be seen as an unblinking white star on a clear sky, it is twice as bright during the opposition period.

While the golden hour has passed, Jupiter will still reign as a bright white star in the early night sky until about early February 2023, said Mr Tan Jyh Harng, senior science educator at Science Centre Observatory.

He added that this year's opposition saw Jupiter at about 590 million km away from Earth, while the closest approach in 2021 was at about 600 million km.

"This might not mean much for us on Earth, but still presented a good opportunity for amateur astrophotographers who wished to capture a clearer Jupiter," he noted.

For the rest of the year, the planet will be most prominent in the night sky, after the moon.

It can be spotted from now till late October after sunset, in the eastern direction, which is the opposite of where the sun sets in the west, said Mr Tan.

From November till the end of 2022, Jupiter will start appearing higher in the sky after sunset.

Opposition aside, turbulence in the atmospheric air is a key factor affecting the sharpness of a planet through a telescope, he added.

Atmospheric turbulence distorts the visuals of the planet.

Mr Robin Lim, 38, an astrophotography hobbyist, said his telescope image of Jupiter at around 11pm on Sept 26 - a few hours before the opposition - was marred by atmospheric disturbance.

"The sky was clear, but there was this thin layer of high clouds. I could only capture one of Jupiter's moons at that time, which is Io," added the operations director, who attempted to view the phenomenon from a void deck in Toa Payoh.

Mr Lim said on Nov 8 a total lunar eclipse and blood moon will take place, and the phenomenon will be visible from Singapore.