Julie Tan calls out Pan Ling Ling for bullying, thanks Hong Huifang for protecting her 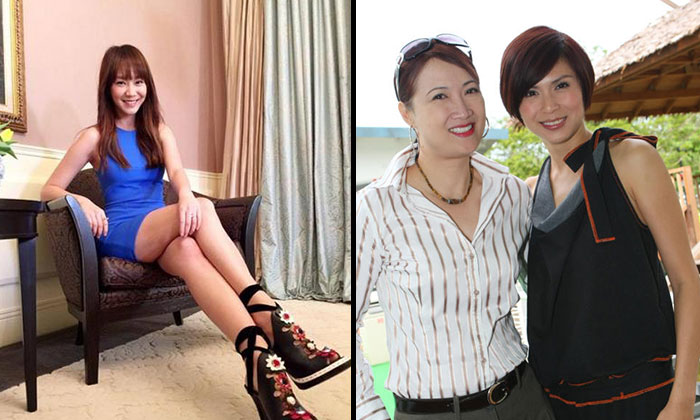 This comes after Hong Huifang sent a WhatsApp message to friends within the entertainment industry, announcing the end of the friendship between her and Pan.

In the message, Hong said that Pan openly talked about an unverified romance between Tan, 25, and Hong’s son, Calvert Tay, 18, at a dinner with other friends from the entertainment industry last month.

According to Shin Min Daily News, Hong said in her WhatsApp message that Pan mentioned that Tan had a few past relationships, including one with a Caucasian boyfriend.

Pan said that she was afraid that the Caucasian man might be a carrier of STDs and pass the diseases to Tay, whom Tan is rumoured to be seeing.

Hong’s message also talked about Pan’s remarks on Tay and Tan’s alleged relationship, which the paper has chosen not to publish due to their slanderous nature.

Shin Min Daily News contacted Tan for comments on the incident, who said that she felt Pan’s insulting words were akin to bullying, and have seriously damaged her reputation.

Tan said she was willing to step out and be an example, so others can say ‘no’ to bullying within the industry.

She added that her mother was especially upset when she found out about the incident.

“I only found out about the incident yesterday (July 23). Ms Hong did not tell me about it at all because she wanted to protect me. A lot of people don’t understand that and think that she is picking on Pan Ling Ling.

“Actually she is just standing up for me and speaking the truth. Only after I read the news and the WhatsApp message did I understand why she was so angry.

“This matter is actually very serious. My mother was devastated when she came to know about it. I feel that I owe it to Ms Hong, as well as myself to make a statement. We will no longer tolerate this bullying.”

She also revealed that in the past, she had heard from many friends Pan’s slanderous remarks about her, and some other younger celebrities have also complained about the bullying.

"To the one talking shit about me, you know what, f*** you. I used to respect you cos you’re a qian bei, but now sorry lost all respect.” 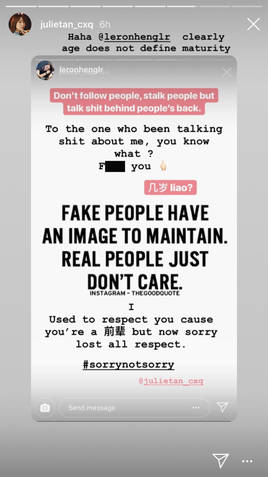 Pan’s husband, Huang Shinan, told Shin Min Daily News in an interview that his wife told him that she has already apologised to Tan’s mother.

However, he added that the apology was made to pacify the parties involved, and there was still a need to unveil the person who had tipped the media off in the first place.

He said in Mandarin:

“We can’t just let it go. Even if we apologise, we must find the person who fabricated the rumours.”

“When everyone is insistent that the fault lies with you, you got no choice. The situation today was caused by unintentional remarks taken wrongly by others.

“This is obviously a mistake. I told my wife, if you did something wrong, then apologise. Even if you didn’t, you can also apologise.

“This will pacify the parties, and foster harmony.”

Huang also revealed that he was good friends with Tan’s parents:

“We dote on Julie. When she first joined the entertainment industry, we were very concerned, and her parents treated us very well too.”

Thus, when rumours pointed to Pan spreading rumours about Tan, Huang could not believe it. He exclaimed:

“How can this be? Some people really want to see chaos. During my birthday last month, Huifang and Xiuhuan also came to our house for a meal.”

Huang said that his wife is a cancer survivor and is still under medication. He is therefore afraid that the news may have a negative impact on her health.

“Now she has no mood in everything she does. She doesn’t like to eat and is always tired. In addition, she is always busy with filming, so I am very worried.”

He added that he and Pan will organise a meal with Tan’s mother to clear up the misunderstanding.