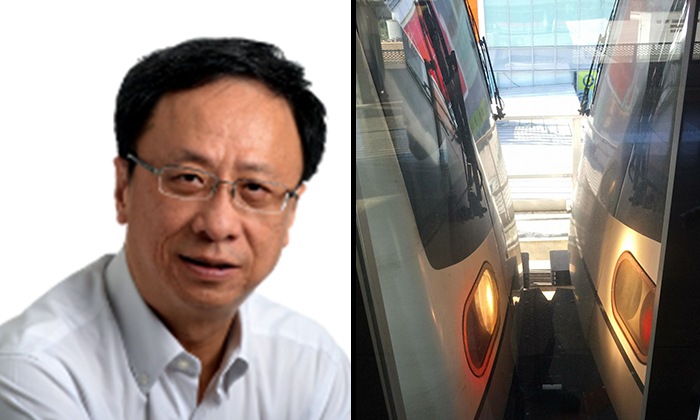 The initial response from the Land Transport Authority (LTA) and rail operator SMRT to the train collision at Joo Koon MRT Station on Wednesday morning (Nov 15), where the trains were stated to have ‘come into contact’, downplays the seriousness of the accident, says Senior Transport Correspondent, Christopher Tan from The Straits Times.

“This morning at 8.18am, a train heading in the direction of Tuas Link station stalled at Joo Koon station. At 8.19am, a second train stopped behind the first faulty train.

“At 8.20am, the second train moved forward unexpectedly, and came into contact with the first train.”

However, in an updated statement issued by the LTA at 7.42pm, the incident was termed a ‘collision’.

In his article, Christopher Tan said that the accident which left 29 injured - of which two sustained injuries that were categorised as ‘major emergencies’ - was severely downplayed by the agencies’ reluctance to 'call a spade a spade.'

“First and foremost, trains are not supposed to collide, or even come into contact with each other (Unless one train was used to push out another disabled one, as has often been the case lately).

“That is what the signalling system is for. It keeps a safe distance between trains, acting like an invisible, impenetrable barrier between locomotives.”

“No metro system can operate without a reliable signalling system, which is actually the eyes of the network.

“This is why when trains sense there is something amiss with the signalling system, or there is some interference, they will activate their emergency brakes. It is safety protocol – to be safe first rather than sorry later.”

Christopher explained that under normal circumstances, a train cannot pull into a station if there was one in front of it, which had not left the station yet.

Due to this reason, trains sometimes stop in the middle of tunnels, leaving passengers puzzled.

More often than not, this is because the train in front stopped for too long.

The second train must stop as it cannot breach the invisible barrier put in place by software protection features — even if it means stopping in the middle of nowhere.

What’s worrying is that a train had somehow managed to breach this safety barrier.

The preliminary finding by Thales, the Land Transport Authority (LTA), and SMRT uncovered that the glitch which caused the collision yesterday lies with the new system.

Although the system has seen numerous technical issues, none of it compromised passengers’ safety until yesterday.

“So, it is regrettable indeed that SMRT and the LTA have chosen such a light term earlier in the day to describe the incident.

“Like the tunnel flooding which took place just last month, it is not trivial. A signalling failure can have grave consequences.

“You do not need to have a vivid imagination to think of what might have happened if either train had more passengers.

“And if a “coming into contact” nudge can result in 29 people getting hurt, think of what a high-speed collision would entail.”

Throughout the 30 years of Singapore’s MRT system, only one train collision resulted in injury.

The incident, which happened in 1993, saw one train crashing into another at Clementi station, injuring more than 150 people.

A public inquiry found that oil spill on the tracks had compromised the ability to stop in time for the second train.

It was, however, not a signalling issue.

Christopher further urged SMRT and LTA to come out with full transparency on yesterday’s incident at Joo Koon, as well as steps to prevent such an event from recurring, adding:

“They will no doubt do so, just as they did after the Oct 7 tunnel flooding. Reams of information will be made public.

“And herein lies the rub: How does seeking to minimise yesterday’s incident help reassure a public whose confidence has been shaken repeatedly since 2011 that the issues are being put right?”