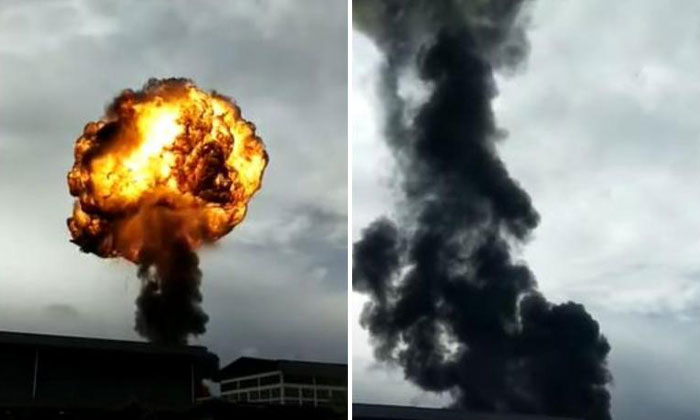 A fire at a petrochemical plant in Johor was so huge it could be seen from Singapore, causing some witnesses to report the incident to the authorities here.

Malaysian news publication, The Star, reported that the fire broke out at the Titan Himont Petrochemical plant in Tanjung Langsat Industrial Complex, near the industrial town of Pasir Gudang.

Quoting a statement from the Johor Fire and Rescue Department, it reported that the blaze started at about 5.15pm on Thursday (Feb 24).

As of 6.50pm, operations to put out the fire were ongoing, with 26 firefighters on the scene.

In a 42-second video of the blaze uploaded on YouTube, a large fireball caused a mushroom-shaped cloud to form.

A photo of it has since gone viral.

Alarmed by the blaze, they called emergency services in Singapore.

The Singapore Civil Defence Force (SCDF) said it received numerous calls about a major fire incident that occurred to the north-east of Singapore on Thursday afternoon.

It said: "Upon investigation, SCDF confirms that there is no major fire incident happening locally within Singapore."

A Pasir Ris resident, who wanted to be known only as Ms Seow, said she received a video of the fireball from a neighbour.

Ms Seow said: "I saw the smoke from the fire at around 7pm from Pasir Ris Beach. I'm worried about it reaching Singapore and affecting the air (quality)."