Johor crash: Bus flew off the highway before smashing into wall 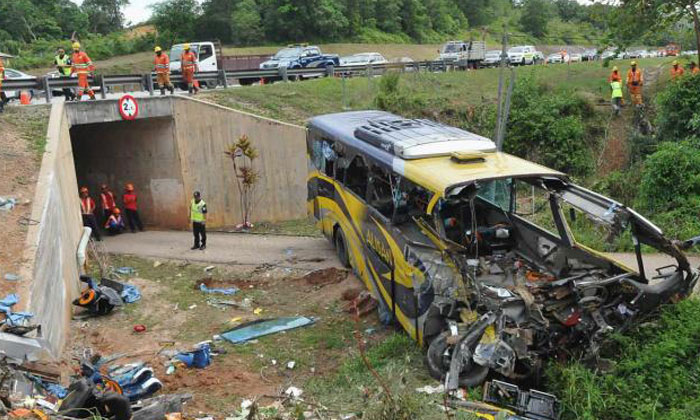 Two Singaporean women were among 14 people who died yesterday when a bus plunged more than 6m off the North-South Expressway near Muar in Johor, the police said.

Sixteen others, including six other Singaporeans, were injured in the accident, which happened at around 4am.

The police told The Sunday Times that six men and seven women, as well as one female child, were among those killed in the Christmas Eve accident.

No other details were immediately available.

Although Muar police chief Azman Ayob said the bus was likely to have been speeding when its driver lost control, the cause of the accident was still being investigated.

"Some of those who survived are seriously injured and we can't interview them," Mr Azman said.

Checks found that there were no signs of the Alisan Gold Coach bus braking on the 150m grass patch by the side of the highway, which the police say implied that the driver did not attempt to slow down before the bus plunged from the highway.

The bus was traveling from Johor Baru to Kuala Lumpur.

All the dead and injured were taken to the Sultanah Fatimah hospital in Muar.

At least four survivors have been discharged.

Among those hurt were seven Malaysians, two from Myanmar and a person whose nationality had yet to be verified.

The Johor Fire and Rescue Department received a distress call at around 4am. Its deputy director Mohd Yusof Mohd Gunnos said the road surface was in good condition and it was not raining.

Mr Ahmad Fahmi Khairuddin, 19, claimed the bus was speeding before he saw it "flying" off the highway and smashing into a concrete wall below.

Mr Ahmad Fahmi was playing a board game with three friends at 3.25am at his home, about 100m from the accident, when the crash happened.

"The noise was three times as loud as a tyre exploding. I heard screams for help. My friends and I helped to carry whichever victims could be moved," he told Bernama news agency.

Malaysian daily Berita Harian reported that one of those killed was Ms Nor Saidatul Akmal Idris, 21, who was due to marry on Jan 29.

Bernama also reported that Myanmar national Ralza Uk's plans to celebrate Christmas in Kuala Lumpur were dashed after his face and arm were injured.

"When the bus fell, I felt it floating but I was still in my seat. Suddenly, I felt pain all over my body and couldn't move," the 25-year-old said.

In response to the accident, Tan Sri Lee Lam Thye, chairman of the Malaysian Institute of Road Safety (Miros), called on the government to set up a transportation safety board as an independent government investigative agency for civil transportation accidents.

The setting up of a board was a key recommendation set out by an advisory panel following a bus crash in Genting Highlands in 2013 that killed 37 people.

Singapore's Ministry of Foreign Affairs (MFA) said in a statement: "We are saddened by the tragic bus accident. The Singapore Consulate-General in Johor Baru is in close contact with the Johor authorities. Our consul-general and MFA officers are at the hospital in Muar to assist affected Singaporeans and their next of kin."