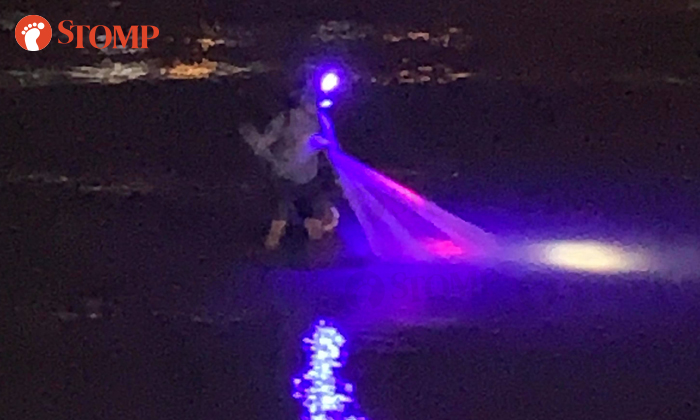 A jogger was concerned to see a man fishing with a net in the waters of East Coast Park during the early hours of Thursday (Aug 20).

Stomper Carmen was jogging in the area at around 5am when she spotted the man.

She said: "Rod fishing is no fun liao, so bring net?

"I have been running at East Coast Park for sometime but it's my first time seeing net fishing, which is prohibited there.

"I don't think net fishing is healthy for the sea habitat at East Coast Park."

The Stomper, who submitted photos and a video of the man fishing in the sea, also noted that net fishing is not allowed in areas managed by the National Parks Board (NParks).

Besides working with other agencies to educate the community to fish only at designated sites, NParks also works closely with fishing communities to promote responsible fishing.

This is in line with the agency's balanced approach of using outreach and education as key strategies for biodiversity conservation.

NParks has also been engaging anglers through Marine Stewards Singapore to come up with some best practices for recreational fishing, it said earlier in a statement regarding a 80kg leopard whipray that was caught at Bedok Jetty.

"This includes practising voluntary catch-and-release fishing, where fish are released back into the sea if not to be eaten. This is especially for juveniles, and endangered and threatened species," added a spokesman.

Sustainable fishing practices, such as hook-and-line fishing and scoop net fishing, are also encouraged. This allows the fisherman some control to target specific groups of fishes and is less destructive compared to traps and nets.

More information on sustainable fishing can be found here.