Jiang Jinfu's model GF reveals more details about abuse: 'When it got serious, he would use a hammer' 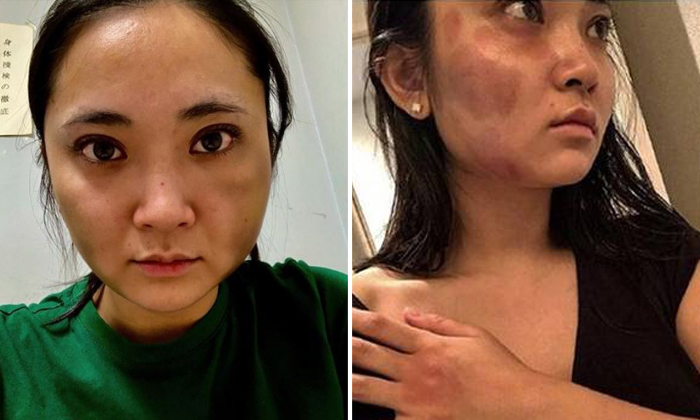 Chinese actor Jiang Jinfu's girlfriend has revealed more disturbing details on her abuse, claiming she had two teeth knocked out by Jiang during one violent episode, while on another occasion, she "thought she was going to be killed".

Japanese model Haruka Nakaura shared in an interview on Japanese TV programme Vivit that "when it got serious, he would use a hammer."

In the segment broadcast on Tuesday (Nov 27), her face was not shown and her voice was masked.

Describing the abuse, she said: "The house was full of blood, and when he didn't have to strength to hit me anymore, he would kick me, I thought I was going to be killed."

In a social media post last week which has since been deleted, Haruka had alleged that Jiang had kicked her in the stomach when she was pregnant, causing her to miscarry.

Haruka also revealed in the interview that the violence would occur whether they were at home or outside, and when she tried to run away, he would threaten her with a knife.

She finally managed to escape to a police station to make a report and was sent to the hospital, where she underwent more than a month of treatment for severe injuries.

A South China Morning Post report citing Sina as its source stated that police in Japan have issued an arrest warrant for the actor.

Denying rumours that the pair has reconciled, Haruka reportedly said in the interview: "No, I'll never forgive (him), he must be arrested."

Jiang has yet to respond to media queries after posting a public apology to his Weibo account on Nov 20.

The 27-year-old actor, who shot to fame after appearing in TV drama Xuan-Yang Sword: Scar of Sky, took a break in April to study in Japan, where he is believed to have met Haruka. The two of them were last spotted in public at Beijing International Airport in September.