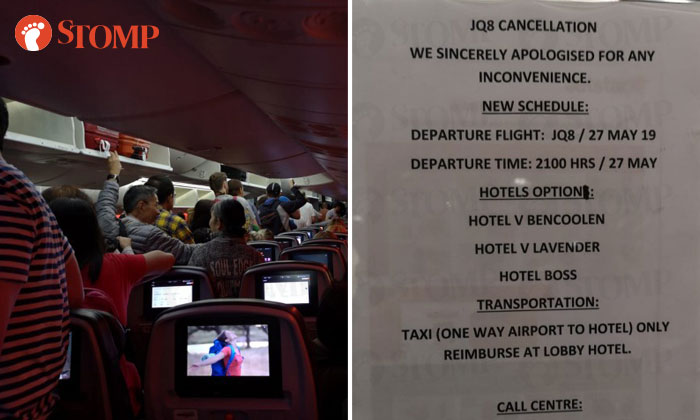 A Jetstar flight from Singapore to Melbourne that was scheduled to depart at 9pm on Sunday (May 26) has been delayed for over 24 hours due to an engine valve defect.

Stomper Andrew, a passenger on the flight, alerted Stomp to the delay.

"After the passengers had boarded the flight, the captain announced that the engine could not start and engineers were being called in," he told Stomp in a phone interview.

"We were then told to leave the aircraft at about 10pm to give engineers time to fix the problem.

He informed Stomp that he received an update via message on Monday morning informing him the flight had been pushed back from 9pm to 10pm on Monday (May 27).

Passengers were also given the option to book their own accommodation which Jetstar would subsidize up to $150.

Andrew decided to book a stay at YOTELAir at Jewel Changi Airport due to its proximity to Terminal 1, where the flight would be taking off from.

He added that passengers were given $60 worth of refreshment vouchers and a $35 meal allowance.

The Stomper, who is travelling to Melbourne on holiday with his wife, said their travel plans were disrupted due to the delay.

"I tried to get onto alternative flights but it was not possible as Jetstar said the flight was delayed, not cancelled."

In response to a Stomp media query, a Jetstar spokesman said the flight was delayed due to an engine valve defect, with a replacement part required to be flown in from Melbourne.

"We appreciate delays are frustrating and apologise to customers for the impact to their journey, however, safety is always our first priority," the spokesman said.

"All affected customers were provided accommodation, meal allowances, transport to and from hotels."

The spokesman confirmed that flight JQ8 from Singapore is departing for Melbourne on Monday (May 27) at 10pm.

Related Stories
130 passengers stuck on plane in Yangon after SIA flight to S'pore gets delayed for almost 5 hours
Jetstar flights delayed after IT issue affects its systems at Changi Airport
Stomper stranded in Taipei on NYE after Scoot flight delay, back in Singapore after 2 days
More About:
flight delay
delay
airline
flight