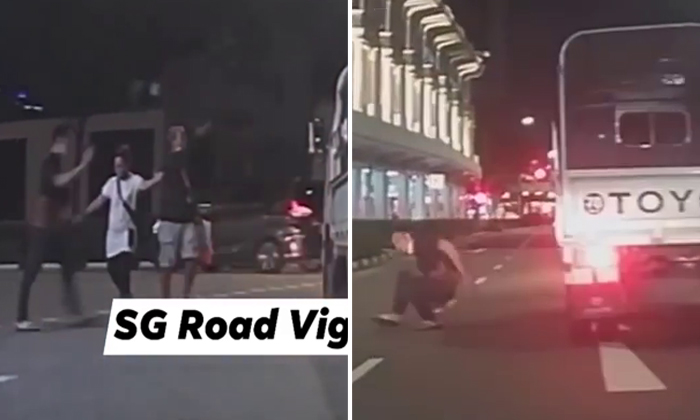 A group of jaywalkers got upset at a lorry driver for honking at them and tried to retaliate, but things did not exactly go to plan.

Facebook page SG Road Vigilante posted a video of the incident that occurred along Victoria Road on Tuesday (Jan 11), at around 9.30pm.

In the video, three pedestrians can be seen crossing the road despite the traffic light not being in their favour. A lorry driver that was making a turn apparently honked at them.

Two of the pedestrians are seen getting noticeably upset and gesturing at the lorry angrily while the third person attempted to hold them back.

One man then tries to throw his lit cigarette at the driver, but the cigarette hits the lorry and bounces back towards him instead.

Undeterred, he continues following the lorry on foot and chiding the driver, before spitting into the vehicle. However, he trips and falls down, landing butt-first on the road.

According to a caption accompanying the video, the pedestrian had also hurled vulgarities and challenged the lorry driver to come down and fight him.

Netizens have slammed the pedestrians, saying that their behaviour was unwarranted and calling them "clowns".

One user said: "Jaywalking and yet wanna act tough..." while another commented: "Malu ah this fellow.."

Related Stories
Man pursues driver and hurls vulgarities after getting confronted for tailgating in carpark
Cyclist and driver hurl vulgarities (and water) during road rage dispute
Man steps out of car to gesture wildly at driver for sounding horn at him at Punggol Field
More About:
funny
fail
pedestrian
road rage
jaywalk
jaywalking