Jaywalker takes his own sweet time to stroll across road in Jurong, ignores multiple honks 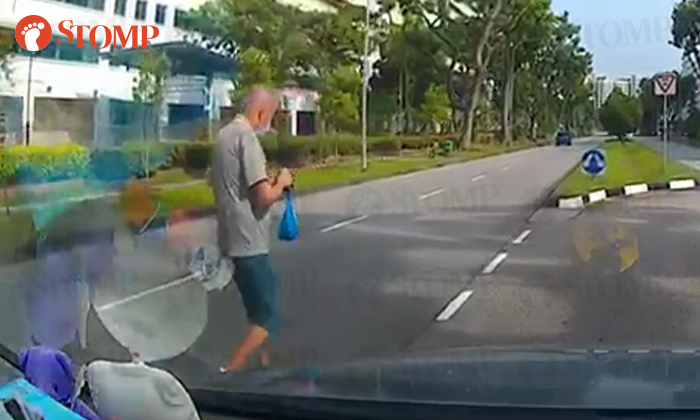 Stomper Tan was driving along Jurong West Avenue 5 on Monday (Dec 21) when he noticed a pedestrian in the middle of the road.

To make matters worse, the pedestrian did not even flinch or turn around when honked at. Instead, he continued crossing the road at a leisurely pace.

Tan shared dashcam footage of the incident that occurred at around 9.54am.

Calling the pedestrian "brazen, self-entitled, and a danger," Tan said: "We were driving along Jurong West Avenue 5 when this man simply decided to walk across the road even though he apparently was very much aware of our oncoming vehicle.

"We thought to honk to warn him but he brazenly proceeded on walking right in front of our vehicle, resulting in our needing to stop in the middle of the road for him.

"He did not appear to be of unsound or incapacitated mind, except perhaps for holding a haughty disregard for traffic rules and the safety of others and himself."

Asked if he thought the pedestrian might have been hard of hearing, Tan told Stomp: "I wouldn't think so as he seemed to have noticed our car approaching.

"It also seemed that he was deliberately looking the other way as our car approached."

Related Stories
So risky! Pedestrians cross road after losing patience over traffic light in Toa Payoh
So dark, and jogger crosses road without looking out for traffic during green light
Close shave for elderly man and car in near-accident in Tampines
More About:
pedestrian
jaywalk
dangerous