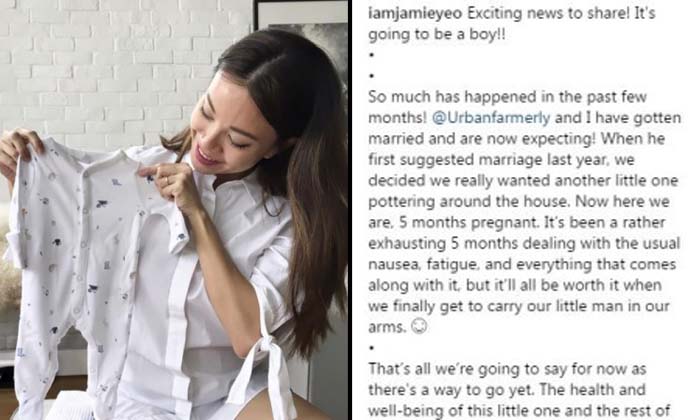 Local celebrity Jamie Yeo announced on her public Instagram account that she has got married sometime during tha past few months, and is now five months pregnant.

The 39-year-old radio DJ made a post saying that her fiance, Rupert, had since tied the knot with her in the last few months.

In April, Jamie Yeo announced that the 38-year-old British expatriate, whom she met through Tinder in 2015, got engaged.

In an interview with 8 Days magazine, Yeo said that she was "looking forward to a future with Rupert."

She told the magazine that Rupert has been helping her raise daughter Alysia, whom Yeo has sole custody of.

However, the couple revealed no further news about their wedding plans.

So it came as a surprise to most when Jamie Yeo posted about her marriage and pregnancy.

She said that when she and Rupert decided to get married a year ago, they really wanted to have another child to join Alysia.

Jamie Yeo added that the past five months have been exhausting as she had to deal with the usual set of problems that come with pregnancy, like nausea and fatigue.

However, she also revealed that they will be having a son, and that it will be worth all the trouble when they finally get to hold him.

"That’s all we’re going to say for now as there's a way to go yet.

"The health and well-being of this little one and the rest of our family is of utmost importance to us at the moment so we won’t be answering any further questions from the media.

"You've followed me and given me so much support I thought you deserve to know. I'm so humbly grateful for second (or third) chances!

"Also just in case you bump into me on the streets, no, it's not a beer belly!"