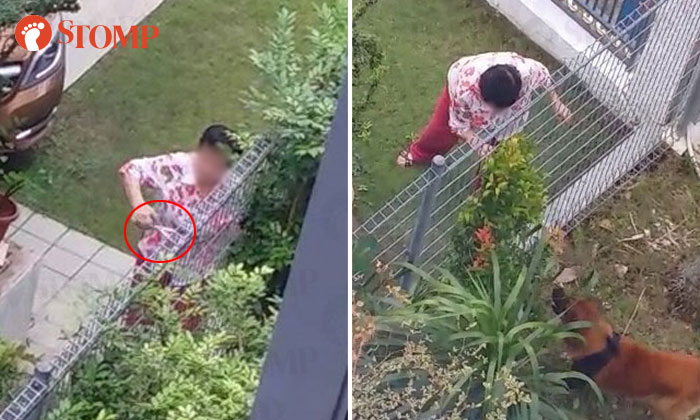 Stomper Philippe caught his neighbour at Jalan Tambur in the Upper Thomson area baiting his dog with one hand and making stabbing motions at it with a pair of scissors in her other hand on Saturday (Aug 4).

Philippe told Stomp that his daughter at adopted the dog about two months ago and since then, his elderly neighbour has not made her disdain for it a secret.

According to Philippe, the woman has been provoking his dog every since but this was the first time he had caught her in the act.

In the video shared by the Stomper, the woman can be seen beckoning the dog over to her before making stabbing motions with a pair of scissors in her right hand through a fence separating the two properties. 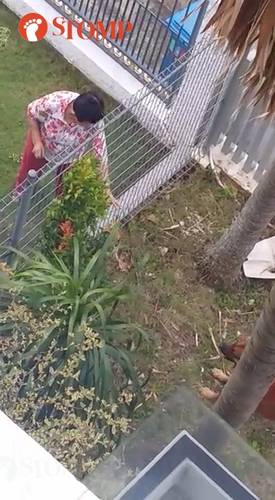 Towards the end of the video, she appears to be holding a knife while taunting the dog. The woman's helper then arrives and takes it away from her.

"I've told her at least three to four times to leave the dog alone," said Philippe.

"Even my maid and her maid have done so but she keeps doing it.

"I wanted to see why the dog keeps barking at her and that's when I saw what she was doing with the scissors.

"I shouted at her that it's not right to do that."

Philippe said that he cannot figure out why his neighbour continues to provoke his dog.

He told Stomp that when the family takes the dog for its daily walks around the neighbourhood, it never barks.

"When she exercises on the second-floor balcony of her home, she will stand at the side and raise both of her fists and shout at the dog who is in the garden on the ground floor of my home.

"So my dog barks at her every morning.

"I've told her to stop disturbing the dog and just avoid it."

When asked if Philippe has contacted any authorities regarding the matter, he said that he hopes to resolve the matter privately.