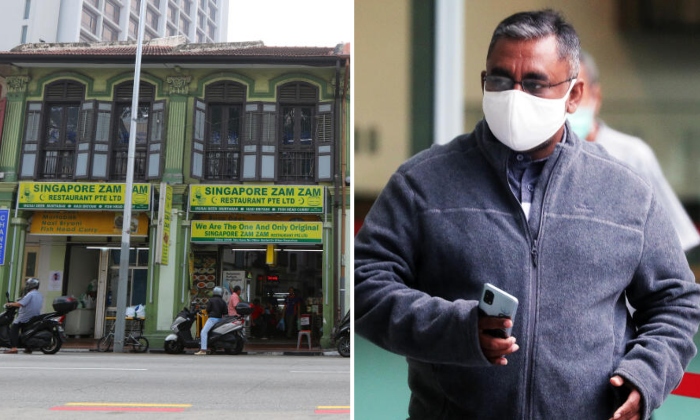 A former director of Singapore Zam Zam restaurant in North Bridge Road, who is now behind bars after he masterminded a 2015 attack against a supervisor of rival eatery Victory next door, has been given a discharge not amounting to an acquittal over his two pending charges.

Zackeer Abbass Khan, now 52, earlier claimed trial to one count each of criminal intimidation and committing a rash act to endanger human life.

With this latest move, he can still be prosecuted again if new evidence were to surface.

Zackeer had been accused of committing a rash act along North Bridge Road at around 7pm on Oct 24, 2020.

He was driving a Toyota Vellfire at the time when he allegedly swerved the car in the direction of a man identified as Mr Amir Norman Halim.

Zackeer is also accused of threatening Mr Amir that day by saying: "Why (did) you fight Habeeb? If you fight again, I (will) poke your eye. If you love your family, you work properly.

Court documents did not disclose details about Mr Amir and Mr Habeeb.

Responding to queries from The Straits Times earlier in October, a spokesman for the Attorney-General's Chambers (AGC) said the prosecution had applied for a discharge not amounting to an acquittal in relation to the pending charges against Zackeer after Mr Amir failed to attend court on Sept 22, 2022.

The AGC spokesman added: "(The discharge) was granted by the court on Sept 23, 2022. Investigations revealed that Mr Amir had left the country on March 3, 2022, and is believed to be in Malaysia. The police have indicated that they will continue in their efforts to locate Mr Amir."

Separately, Zackeer had been sentenced to six years' jail with six strokes of the cane on May 11, 2020.

In March 2020, the court found Zackeer and former safety officer Anwer Ambiya Kadir Maideen, then 50, guilty of one count each of engaging in a conspiracy to cause grievous hurt to a supervisor of Victory restaurant with a weapon.

The attack on Mr Liakath Ali Mohamed Ibrahim took place at around 10pm on Aug 26, 2015.

In 2020, District Judge Mathew Joseph also convicted Zackeer of criminal intimidation as he had threatened to injure Mr Liakath, then 52, on Aug 22, 2015.

Meanwhile, Anwer had admitted to being a senior member of a secret society. He had joined the gang in 1990 and was a "fighter" there.

Judge Joseph sentenced Anwer to a total of 5½ years' jail.

Zackeer and Anwer were the last two people linked to the attack to be convicted in court.

Others, including secret society member Joshua Navindran Surainthiran, were dealt with earlier.

Joshua, who was 23 when he used a knife to slash Mr Liakath, was sentenced to 6½ years' jail with six strokes of the cane in November 2016 over the attack and other offences.

Zackeer had asked Anwer to arrange an attack on Mr Liakath and offered money to get the job done.

In his statements to the authorities, Joshua said Anwer called him on Aug 23, 2015, and offered him $2,000 to slash Mr Liakath's face.

The prosecution said that after the slashing, Zackeer handed $2,000 to Anwer to pay Joshua.

Earlier reports stated that Mr Liakath was left with a permanent scar after the attack.