Jail for woman who walked son to pre-school, went for movie while on MC amid Covid-19 outbreak 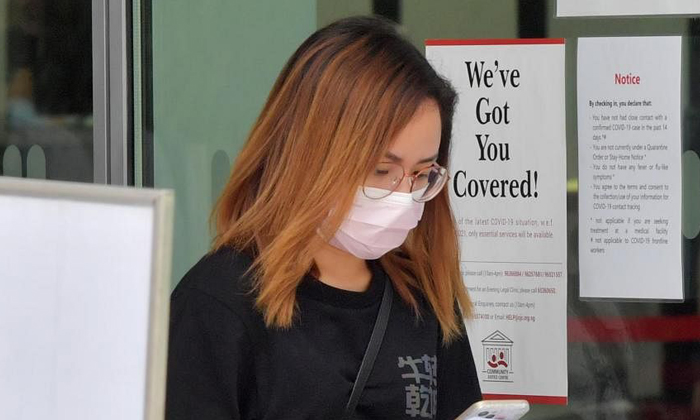 A woman who walked her son to his pre-school during the Covid-19 outbreak even though she was supposed to stay at home was on Wednesday (June 22) sentenced to five weeks' jail.

Michelle Foo Shi Ching, now 25, also took a private-hire car to MacPherson before making her way to Great World City shopping centre in Kim Seng Promenade, where she met four friends for a movie on July 17, 2020.

The Malaysian woman, who is a Singapore permanent resident, had pleaded guilty on Jan 31 this year to two charges under the Infectious Diseases Act.

During an earlier proceeding, defence lawyer Mohamed Arshad told the court that according to a psychiatrist, Foo was likely to be suffering from an adjustment disorder at the time of the offences.

District Judge Marvin Bay then called for a report to assess her suitability for a mandatory treatment order (MTO).

After receiving a report from the Institute of Mental Health, the judge gave Foo a jail sentence on Wednesday, adding: "I note that... (her) condition of adjustment disorder with depressed mood might not have met the criteria meriting (an MTO)."

Judge Bay, however, noted that Foo is a "fairly youthful offender" who had an "extremely fractious relationship" with her husband.

Deputy Public Prosecutor Jonathan Lee told the court in January that Foo had gone to a clinic on July 14, 2020, after she complained of a sore throat and cough.

A doctor then diagnosed her with an upper respiratory tract infection and issued her a medical certificate (MC), stressing that she was required by law to stay home for five days.

The doctor also told Foo that she was not supposed to leave her home for any purpose except to seek urgent medical attention. Foo accepted the MC and understood the terms.

Despite these, she left her Bedok North flat at around 9.15am on July 17, 2020, and walked her son to a nearby PAP Community Foundation Sparkletots pre-school.

After that, Foo walked home before she took a private-hire car to a block of flats in MacPherson Lane at around 3.30pm that day.

About two hours later, she took another private-hire car to Great World City, where she met her friends for a movie.

She took a taxi home when the movie ended, only to reoffend at around 3.30am the next day.

This time, she took a private-hire car to the MacPherson Lane flat and returned to her home about seven hours later.

Court documents do not disclose how her offences came to light but when caught, she initially denied leaving her home during the duration of her MC.

The DPP had said: "She only admitted after (she) was confronted with the evidence. The accused admitted that she knew that it was an offence to leave her (home) during the duration of the MC but she 'did not think too much about it' when she did so."

Foo's bail was set at $2,000 on Wednesday and she was ordered to surrender herself at the State Courts on Friday to begin serving her sentence.

For committing an offence under the Infectious Diseases Act, a first-time offender can be jailed for up to six months and fined up to $10,000.