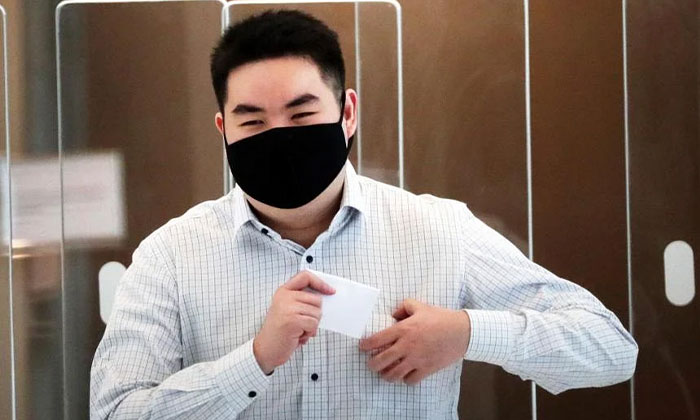 A Singaporean man who was a student at a top British university when he admitted to filming women at various places here, including toilets, was on Wednesday (June 22) sentenced to a year's jail and fined $2,500.

In what the prosecution described as "arguably one of the most premeditated cases of voyeurism to come before the courts", Colin Chua Yi Jin, now 24, pleaded guilty on July 29 last year to seven counts of insulting the modesty of women and one charge under the Films Act.

His clips involved 11 identified women and one unknown victim.

There was initially a gag order on his identity, but it was lifted last year after Chief Justice Sundaresh Menon upheld a lower court decision.

Chua's victims wanted his identity to be revealed and had pushed for the gag order to be lifted.

The Chief Justice said that courts have the power to impose gag orders to protect victims - to prevent them from suffering further and so that victims are not afraid to come forward.

But he added: "A gag order has nothing to do with the benefit of accused persons."

He also noted that Chua's victims spoke with one voice and had wanted his identity revealed.

The gag order still remains on details that could lead to the identification of the victims, including their relationship with Chua and the name of his university, where he was enrolled in 2018.

During an earlier proceeding, the court heard that Chua's first victim, then 18 and studying in a junior college, was recorded showering in a hotel room toilet in the wee hours of Dec 2, 2015.

In early 2016, the principal of the junior college told this victim a clip of the incident had been circulating online and the police were alerted.

The video, which was about 14 minutes long, showed the victim's bare chest and private parts.

As at August 2020, the video was still circulating on several websites.

The woman said in her victim impact statement that she felt betrayed.

Deputy Public Prosecutor (DPP) Tan Zhi Hao had said at the time: "She has turned down many social activities that involve staying at birthday parties at hotels and chalets in fear that she would have to use a public toilet. She has self-esteem issues and feels 'very unworthy'."

Among other places, he installed a recording device in a toilet in his Singapore home and filmed some of his victims.

One of them was 19 years old when he secretly filmed her relieving herself in December 2016.

The clip, which was about a minute long, showed her face and private parts.

In October 2018, she received a message from an unknown person on social media platform Instagram.

The message contained two still pictures of herself in the toilet.

The prosecution said: "The unknown person asked the (woman) if the subject in the picture was her, and stated 'we have met... some time back'.

"Thereafter, (the woman) conducted a search on the Internet and discovered the video... on (a pornographic website)."

Separately, Chua also took an upskirt video of a 20-year-old woman while she was on an escalator.

The court heard last year that two of his videos were circulated online.

After receiving multiple reports between early 2016 and June 2019, officers from the Singapore Police Force identified Chua as the main suspect following preliminary investigations.

They raided his home on July 3, 2019, and seized seven of his personal devices.

Among the two videos that were circulated online and the other 16 found in his devices, 14 were taken in his home.

He later admitted his offences to the police.

DPP Tan had said in court last July: "In total, he estimated that the number of voyeuristic videos he (Chua) had filmed was 'maybe three digits'.

"He would commit the offences when he felt stressed from school or work. He felt that filming the victims 'was an addiction' to him."

On Wednesday, the prosecution urged the court to sentence Chua to at least 13 months' jail and a fine of $3,500.

In their submissions, DPPs Tan and Ng Shao Yan said Chua's offences had caused the victims prolonged psychological trauma, and they continue to grapple with the consequences of his conduct even to this day.

The prosecutors added: "The accused has also displayed a lack of remorse throughout these proceedings. During investigations, he was uncooperative, retracted from his initial admission and provided contrived and incredulous responses to the police."

They also said that the victim impact statements of the 11 identified women describe feelings of shock and betrayal as well as lingering feelings of paranoia when interacting with men and when they used public toilets.

Defence lawyer Kalidass Murugaiyan pleaded for Chua to be given nine months' jail, stressing that he was below 21 years old when he committed the bulk of his offences.

The lawyer told the court that Chua suffered from voyeuristic disorder and had taken steps to get treatment.

He also said that Chua was deeply apologetic for the hurt he had caused his victims.
It was not mentioned in court if Chua is still studying at the British university.

Before handing down the sentence, District Judge Tan Jen Tse said that the impact caused to the victims was severe.

For each charge of insulting a woman's modesty, an offender can be jailed for up to a year and fined.

Videos 24-year-old recorded of his victims

In a case described by prosecutors as "one of the most premeditated cases of voyeurism to come before the courts", Colin Chua Yi Jin, 24, admitted to filming videos of his victims that numbered "in the three digits". These were some of the videos Chua had captured:

Location: A toilet of a hotel room

What he did: Chua recorded a video of an 18-year-old girl as she was taking a shower. The clip that was about 14 minutes long showed her chest and private parts.

What he did: Chua secretly recorded a video of a 19-year-old girl as she was relieving herself. The clip that was about a minute long was later found on a pornographic website. It showed her face and private parts.

Location: A bedroom in Singapore

What he did: Chua hid behind a set of window blinds and recorded a video of an unknown woman. He managed to capture the woman's face as she was clad in her underwear.

What he did: This victim, then 20, was the same one he had previously recorded in a hotel toilet in December 2015. She was using the toilet when Chua secretly filmed her.

Location: An MRT station in Singapore

What he did: Chua recorded an upskirt video of a 20-year-old woman as she was standing on an escalator. He managed to capture her face, inner thighs and underwear.

Location: A toilet in his accommodation in Britain

What he did: Chua secretly filmed a 21-year-old woman while she was relieving herself. The clip showed her face and private parts.

What he did: He secretly filmed two women, aged 19 and 21, after the pair showered. The videos of both victims showed their private parts and faces.