Jail for man who removed mask to cough at supermarket staff, sprayed sanitiser at her 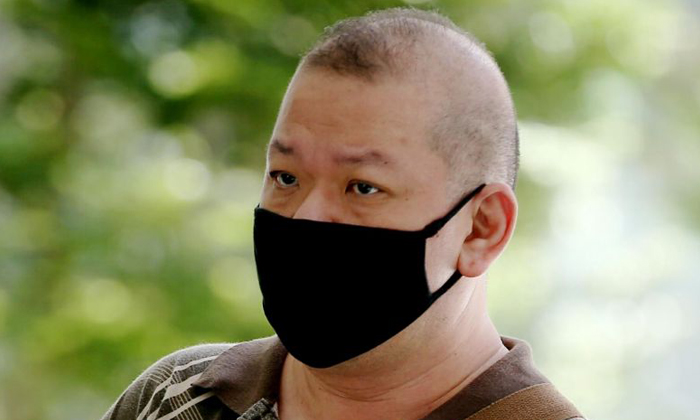 A man who removed his mask and coughed at a supermarket crowd controller amid the Covid-19 outbreak was jailed for five weeks on Wednesday (Sept 23).

Singaporean Tan Shiaw Wee, who was free of the infection, committed the offence after he spotted Ms Ng Poh Wei partially remove her mask for a few seconds to wipe perspiration off her face.

Tan, 47, pleaded guilty on July 28 to one charge each of harassment and an offence under the Covid-19 (Temporary Measures) Act.

One count of using criminal force was considered during sentencing.

Ms Ng, 52, was working at the entrance of the Sheng Siong supermarket at Block 451 Bukit Batok West Avenue 6 at around 8am on April 22 when Tan withdrew cash from an ATM nearby.

He noticed that Ms Ng had partially removed her mask to wipe her face and scolded her.

Tan then picked up a hand sanitiser bottle meant for supermarket customers and sprayed her several times before walking away.

Ms Ng said she would take Tan's photograph and alert the police.

Tan who overheard this, approached her, removed his mask and coughed at her once before leaving.

Deputy Public Prosecutor Norman Yew had earlier said: "The victim felt the cough and became alarmed and scared that she might be infected with Covid-19."

Court documents did not state how the authorities found Tan.

District Judge Christopher Goh said on Wednesday that it was "very unfortunate" that Tan had let "something to trivial" get the better of him.

He could have been jailed for up to six months and fined up to $5,000 for the harassment charge.

A first-time offender can be jailed for up to six months and fined up to $10,000 for a charge under the Covid-19 (Temporary Measures) Act.

Related Stories
Man removed mask to cough at supermarket crowd controller, sprayed hand sanitiser on her
Taiwanese woman who sneezed on security guard and told her to "shut up" jailed 11 weeks
Security officer out on bail for breaching Covid-19 measures gets drunk at work, swears at police
More About:
Covid-19
court