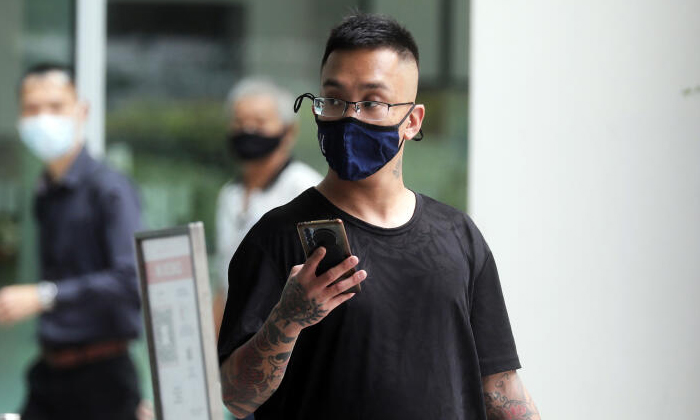 Upset that he was constantly arguing with his wife, a man installed a spy app on her cellphone so he could watch her every move.

Nicholas Wang Weichou, 30, could then listen to whatever she said on the phone in real time and turn on her phone camera to track her whereabouts.

He even deleted one of his wife's Facebook posts and sent her threatening messages.

Wang was on Tuesday (April 5) sentenced to two weeks' jail for unlawfully stalking his wife.

He also pleaded guilty to two unrelated unlicensed moneylending charges and was jailed for another five months.

The court heard that in August 2020, Wang and his wife fought frequently and were not on good terms.

Wanting to keep a close eye on her, he bought a software called TTSPY that would give him access to her social media messages, voice recordings and call logs.

While his wife was taking a nap, Wang installed the app on her phone. He then monitored her activities from his own phone.

On Sept 6, 2020, Wang's wife posted about one of their quarrels on her Facebook page, which upset Wang. He used the spy app to delete the post.

He then posted screenshots of their text conversations on her Facebook and Instagram accounts, but set the posts to "private" so that only she could see them.

Wang then texted his wife threatening messages such as "Don't need tell ppl I hack your account. Nobody can help you. Till you admit what u done."

When he found out that his wife had lodged a police report on Sept 8, 2020, Wang tried to dump his mobile phone at Boon Lay Market.

Separately, in November 2020, Wang borrowed $400 from an unlicensed moneylender but could not repay the loan.

He then agreed to the loan shark's proposal to harass other debtors for money. He placed bicycle locks and notes on their front gates to alarm them.

The maximum punishment for unlawfully stalking is a $5,000 fine and a one-year jail term.

Related Stories
Jail for ex-NUS student who stalked woman on campus, hacked into her Telegram account
Man threatened to kill woman, her mum and her BF after she ended their 'intimate relationship'
Man who stalked former mistress and posted compromising photos of her gets jail
More About:
stalking
couple
hacker
court
threaten