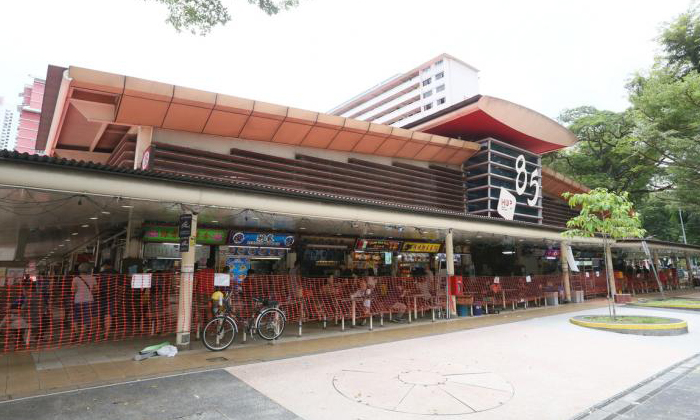 An unvaccinated man lied to a person performing gatekeeping duties at a food centre entrance by claiming he did not have his SafeEntry token and merely wanted to buy food to take away.

Odd-job worker Chua Soon Hean then entered Redhill Food Centre amid the Covid-19 outbreak and did not wear a mask when he interacted with others.

National Environment Agency (NEA) officers later saw him sitting at a table with his girlfriend and checked his vaccination status.

He was told to leave when they found out he was unvaccinated, but Chua flew into a rage and punched two of them.

The 54-year-old Singaporean was on Thursday (Feb 24) sentenced to 26 weeks' jail after he pleaded guilty to assaulting a public servant.

Chua also admitted he had intentionally entered the food centre during a restricted period despite knowing he was unvaccinated.

Two other charges - one count each of assaulting a second public servant and failing to wear a mask at the centre - were considered during sentencing.

Deputy Public Prosecutor Heershan Kaur said: "This is the first-ever prosecution under (regulations relating to Covid-19) for entering a restricted place - being a hawker centre - while the accused person was unvaccinated."

At around 8pm on Oct 23 last year, he went to the food centre with his girlfriend after arranging to meet his friends to have a meal.

After lying to a gatekeeping officer at the entrance, Chua went in to meet two of his friends.

He was later spotted not wearing a mask but put one on when he saw NEA officers walking towards the group. The officers told them not to intermingle and to sit in pairs instead. Chua and his girlfriend left to sit at a nearby table.

He lied to the officers when they conducted a check on his vaccination status, claiming that he did not have his mobile phone or SafeEntry token with him.

They realised he was not vaccinated after checking his NRIC. When an officer, Mr Damian Lee, 51, asked Chua how he had managed to enter the eatery, he lied that no one was at the entrance to check his vaccination status.

Unhappy about being told to leave, Chua assaulted Mr Lee and another NEA officer before his friends held him back. He calmed down soon after.

DPP Kaur said: "During the investigations, the accused person admitted that he knew he was not vaccinated and that he was not supposed to be dining and drinking at the food centre due to his unvaccinated status.

"He claimed that he chose to sit (there) because he was 'used to it' and 'it is so hard to change to the new rules'."

A blood test also found that he was under the influence of alcohol at the time.

For assaulting a public servant, Chua could have been jailed for up to seven years and fined or caned.