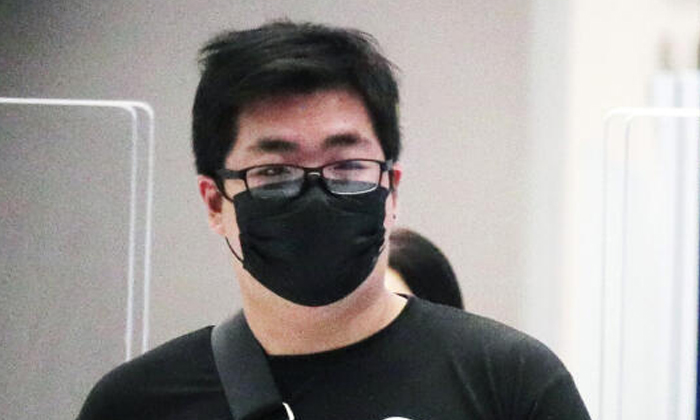 A man was unlawfully riding his e-scooter in a negligent manner on the road when he encroached into the path of a motorcycle. The court heard that he was trying to cross to the opposite side to get to his workplace.

The motorcycle collided into Wong Itto's device, causing the 55-year-old motorcyclist and his daughter, 26, who was riding pillion, to fall on the road.

They were taken to Khoo Teck Puat Hospital, with the motorcyclist suffering injuries including fractures to his eye socket and rib. His daughter also had multiple wounds, the court heard. Wong also injured his head.

The Singaporean will spend an additional three weeks behind bars if he is unable to pay the fine.

He had pleaded guilty to one count each of causing grievous hurt by performing a negligent act and criminal breach of trust while working as a deliveryman.

Wong also admitted to helping a man in an unlicensed moneylending business and acting on the loan shark’s behalf by splashing coffee at the front door of a flat.

Deputy Public Prosecutor Benedict Teong said Wong was riding his e-scooter on the left lane of Woodlands Loop at around 7.40am on Nov 29, 2018, when the accident occurred.

On Wednesday, District Judge Marvin Bay said: "The accused was... fully aware that it was unlawful to ride his e-scooter on the road."

Separately, the court heard that Wong started taking loans from unlicensed moneylenders some time in January last year and ended up owing them more than $2,000.

The DPP said: "Some time in March (last year), one of the unlicensed moneylenders known to him as Lawrence then suggested that the accused could pay off the loans by performing banking transfers and harass other borrowers by splashing paint."

When Lawrence threatened to harass Wong if he did not assist him, Wong agreed to do his bidding.

In a separate case, Wong was working as a deliveryman when he pocketed cash totalling more than $1,300 last year.

For causing grievous hurt by riding his e-scooter in a negligent manner, Wong could have been jailed for up to two years and fined up to $5,000.