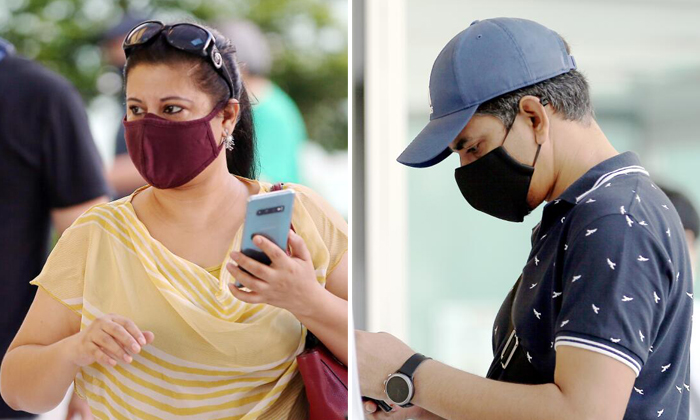 A woman who repeatedly abused her domestic helper from her first day of work was sentenced yesterday to 21 months' imprisonment.

The offender's husband, who had later joined his wife in assaulting Indian national Amandeep Kaur, then 27, was sentenced to four months in jail.

He convicted her husband, Mohammad Tasleem, 41, of two assault charges.

Both offenders are Indian nationals and Singapore permanent residents.

Yesterday, the court also ordered Farha to pay the helper $4,500 in compensation, while her husband was to pay $1,000.

Deputy Public Prosecutor Houston Johannus had said in his submissions that Ms Kaur started working for the couple, who have two young sons, on Nov 9, 2016.

During the trial, Ms Kaur testified that Farha treated her "very badly" from the outset.

The prosecutor said Farha slapped and punched the maid on the day she started working for her.

Ms Kaur testified that Farha slapped her while she was making flatbread in the kitchen. She also said that Farha later punched her right eye.

Ms Kaur testified that Tasleem assaulted her for the first time in mid-December 2016, as he felt that she was slow in preparing milk for his younger son, who was then two years old. Tasleem punched her right eye once.

He assaulted her for the second time about nine days later, when he kicked her waist twice.

On Dec 31, 2016, Farha kicked the maid's lower back twice before grabbing her hair and pulling her out of a room. Ms Kaur was also punched once on her nose, and it bled.

Soon after, the couple and their children left the flat on the fourth storey of a Housing Board block in Rivervale Crescent, Sengkang, locking the front door behind them.

The prosecutor said that "in a moment of utter terror and desperation", Ms Kaur, who did not have the house keys, climbed out of a living room window and perched herself "dangerously" on a ledge.

A foreign worker, Mr Mani Manoharan, who was doing some painting works in the estate, later spotted the maid and used a gondola to help her down.

The court heard yesterday that the couple plan to appeal against their conviction and sentence.