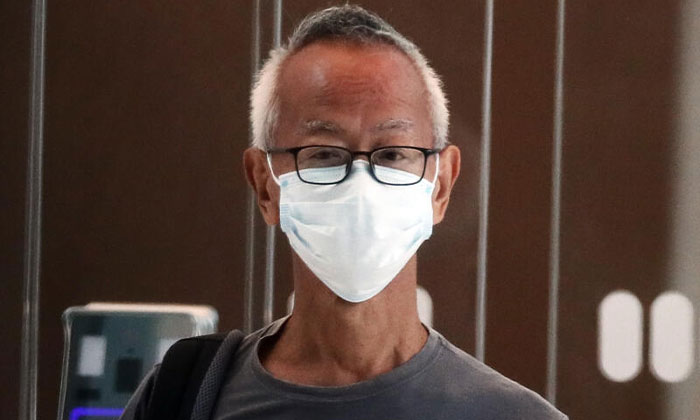 His three brothers are said to be leaders of a local organised criminal group.

The prosecution had earlier described it as "one of the most profitable and elusive illegal remote gambling syndicates which thrived under the cloak of technology for half a decade".

Even though Seet Siau Khuang, 72, was not one of the leaders, he was involved in unrelated unlawful gambling activities and was earlier convicted of an offence under the Common Gaming Houses Act following a trial.

Last month, one of his siblings, Seet Seo Boon, 57, was sentenced to nine years, eight months and two weeks in jail.

He pleaded guilty in December last year to seven charges for offences that include those under the Organised Crime Act, as well as for dealing with the benefits of his ill-gotten gains. A total of 54 other charges were considered during sentencing.

The court heard that in less than two years, the group managed to collect $97.68 million in revenue from one of the gambling websites.

The Organised Crime Act - aimed at fighting crime syndicates - was passed in Parliament in 2015 and took effect in June 2016.

Seet Seo Boon was arrested in 2016 in a crackdown on criminal syndicates. He was among the first people to be charged under the Act.

The court heard that Seet Siau Khuang went to a wet market at Block 48A Tanglin Halt Road on Aug 4, 2013, and a group of police officers later spotted him there that afternoon.

While interacting with him, they discovered that he had several pieces of paper as well as some cash in his possession.

Court documents do not state what prompted the officers to interact with him.

He was then taken to the Alexandra Neighbourhood Police Centre (NPC).

The pieces of paper were later sent to Station Inspector (SI) Lee Seow How, an expert on gambling-relating matters from the Criminal Investigation Department.

SI Lee then prepared a report stating that some of the papers contained records of bets linked to illegal lottery activities. These illicit bets amounted to $95.10, the court heard.

In his submissions, Deputy Public Prosecutor Kenneth Kee said that a total of 75 separate pieces of papers and a blue marker pen were seized from Seet Siau Khuang's possession during his arrest. The court heard that these papers were all found on him.

He was also found with $574 in cash in his possession.

The DPP added: "During the interview... on Aug 4, 2013, at Alexandria NPC, the accused admitted that the... papers were 'illegal 4D bets which he had collected from' about '12 persons' at the wet market area prior to his arrest.

"Additionally the accused expressly informed (an officer) that he had been collecting these bets on behalf of one 'Ah Leong' and would receive a 5 per cent commission of the bet quantum."

Court documents did not disclose what happened next, but on Nov 27, 2016, Seet Siau Khuang was arrested again over alleged fresh, illicit gambling-related offences and a statement was then taken from him.

The prosecutor said: "The accused freely volunteered the following information. First, he had been assisting 'Ah Leong' since the late 1980s to collect illegal 4D.

"Second, the accused would earn a 5 per cent commission for doing so. Third, the accused claimed that he stopped collecting illegal 4D for 'Ah Leong' about 'three to four years ago'."

Seet Siau Khuang's defence had earlier stated that the papers in the August 2013 incident neither belonged to nor were seized from him.

According to the defence, the only papers that belonged to him were Singapore Pools betting slips with numerical entries written in blue marker ink.

Seet Siau Khuang still has pending charges, including one under the Organised Crime Act.

These will be dealt with at a later date.