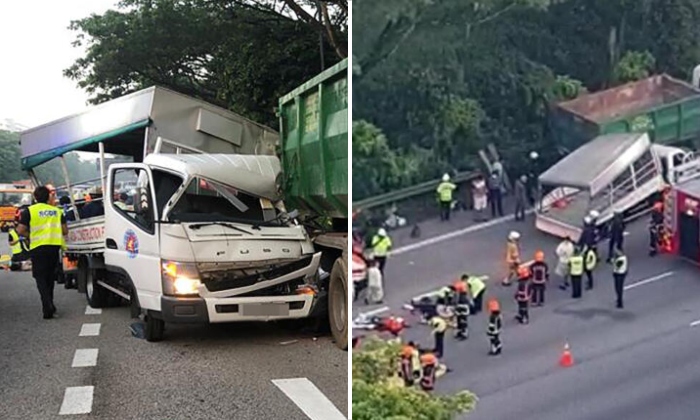 A lorry driver did not keep a proper lookout while driving on the Pan-Island Expressway (PIE) and collided into a truck, killing two passengers seated in the rear cargo area and grievously injuring eight others.

Vellaichami Prabu, 38, was on Monday sentenced to one year in prison after he pleaded guilty to a charge of driving without due care and attention, and causing the death of Bangladeshi Hossain Toffazal, 33, and Mr Sugunan Sudheeshmon, a 28 year-old Indian national.

Another two charges of failing to keep a proper lookout ahead in the accident in April 2021 were taken into consideration for his sentencing.

Vellaichami, an Indian national who has been working in Singapore since 2005, will also be banned from driving all classes of vehicles for eight years after his release from prison.

The court heard that Vellaichami had driven to Tuas at 5.45am on April 20, 2021, to pick up 17 passengers, including Mr Hossain and Mr Sugunan, who were seated on the left side of the lorry’s cargo bed. He then drove to Jurong West to pick up his supervisor.

At around 6am, waste collection truck driver Nijamuddin Mohammad was travelling on the PIE in the direction of Changi when he heard one of the truck’s tyres bursting.

He then stopped the truck along the road shoulder and turned on the vehicle’s hazard lights.

Deputy Public Prosecutor Jason Chua noted that the truck partially protruded into lane five of the five-lane expressway as the road shoulder was relatively narrow.

At around this time, Vellaichami was driving his lorry on the PIE and switched from lane four to five as he intended to exit the expressway.

He failed to keep a proper lookout, however, and noticed the truck only when it was about two lorry lengths ahead of him.

Said DPP Chua: “The accused tried to swerve the lorry, but he was unable to avoid the truck. The front left of the lorry collided into the right rear of the truck.”

Footage of the crash was played in court, and it showed that the impact crumpled the lorry’s front portion and smashed its windscreen.

According to a medical report, Mr Hossain was bleeding from both ears and had a skull fracture. He went into cardiac arrest when he arrived in hospital and could not be revived. Mr Sugunan suffered serious head injuries and was in the intensive care unit, but his condition deteriorated and he died on April 22.

On top of the two deaths, eight passengers on the lorry also suffered grievous hurt.

Seeking 10 to 15 months’ jail for Vellaichami, DPP Chua said the gravity of harm caused is significant.

“The accused had no excuse for failing to see the truck, considering the large size of the vehicle, its hazard lights were turned on, traffic was light, and the truck was stationary for at least 17 seconds before the accused’s lorry collided with it,” he added.

Vellaichami’s lawyer, Mr Edmund Nathan from Lions Chambers, sought four to six months’ jail instead, saying that his client did not see the truck till it was too late because it was still dark when the accident occurred at 6am.

“The truck driver could also have parked his truck properly in a safer zone rather than to stop at a bend that was relatively narrow,” he said.

Mr Nathan added that his client is under financial stress as the sole breadwinner of his family and that his 11-year-old mentally disabled son is unable to walk or talk.

For driving without due care and causing death, Vellaichami could have been fined up to $10,000 and jailed for up to three years.