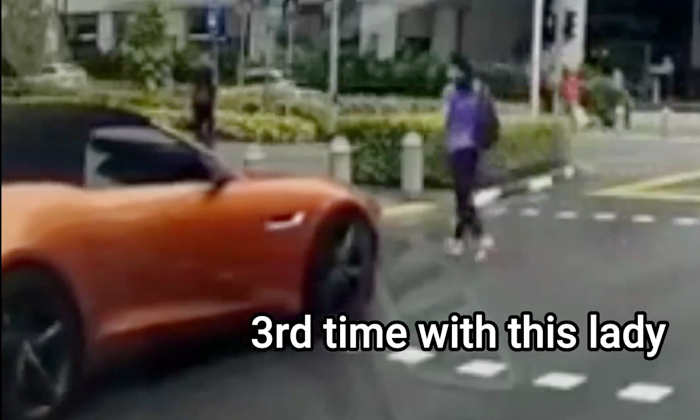 Ganchiong spider? More like ganchiong Jaguar in the case of this driver who was seen inching towards three different sets of pedestrians while they crossed the road at a traffic junction.

The incident occurred at the junction of Bencoolen Street and Middle Road on Sunday (Aug 23), at around 4.10pm.

Stomper Lee alerted Stomp to a video of the incident posted by Facebook page ROADS.sg.

A caption accompanying the video said the Jaguar driver had "stopped at traffic light, but was over the stop line and in the crossing zone".

It also said the Jaguar driver "edged forward whenever a pedestrian crossed in front" and that there were a total of three instances "where he put the pedestrians at risk".

During the minute-long video, the Jaguar driver can be seen inching towards three different sets of pedestrians. In the third instance, a woman is seen hurrying her steps after noticing the Jaguar on the move.

Netizens have called for the motorist who recorded the video to lodge a report with the Traffic Police so that enforcement action can be taken against the driver.

They also wondered what could have caused the driver's actions, with many suspecting that his behaviour was intentional.

Related Stories
Aetos car fails to stop for red right-turn arrow: Aetos investigating, matter referred to police
Driver should have allowed pedestrian with toddler in pram to cross road first
Pedestrian tumbles to the ground not once but twice -- even though car hasn't touched him
More About:
reckless driver
pedestrian
dangerous