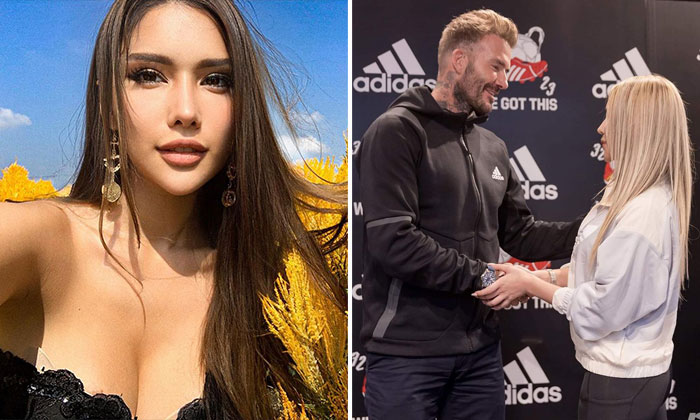 Former footballer David Beckham caused a stir last Friday (June 17), when he flew into Singapore and took part in an Adidas event at its Orchard Brand Centre.

Other panellists at the We Got This Talk Show 2.0 organised by the sport brand included Lions forward Ikhsan Fandi, influencer-entrepreneur Christabel Chua and DJ-YouTuber Jade Rasif.

Rasif, 28, was so impressed by her observations of Beckham, 47, that she shared them on Instagram the next day.

She added that although the event was not a meet-and-greet, he made the effort to take photos with everyone in the room and shake hands with all of them.

There were about 200 guests, most of whom had won invites to the closed-door event, where the panellists shared inspirational stories about overcoming the odds.

Outside the store, a crowd of at least 250 fans of all ages waited to catch a glimpse of the former England captain, even though Adidas Singapore had sent out an advisory on social media to deter members of the public from showing up as there was no fan meet planned.

"After the show, he proceeded to walk outside the store centre to greet the fans waiting outside and to thank them for their support," she wrote, adding that he also took the time to have a chat and photos taken with her and Chua before rushing off for his fifth appointment of the day.

"This was after taking the red-eye flight into Singapore, and moving straight to back-to-back appointments," she said.

"The personification of my favourite quote, 'Work hard, stay humble'."

Related Stories
David Beckham drops by Tekka Market to enjoy a plate of mee goreng
Photos of David Beckham's recent visit to S'pore for those who didn't see him
David Beckham "shows off daring side" with female fan amid rumours of marital problems
More About:
David Beckham
celebrity
Jade Rasif