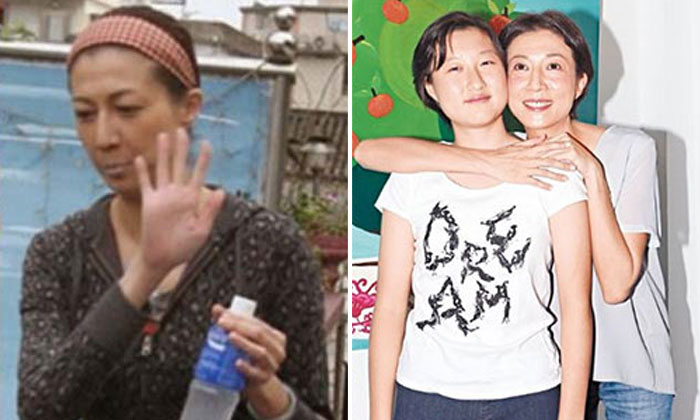 Elaine Ng was arrested on Mar 24 on suspicion of threatening her 17-year-old daughter with Jackie Chan, Etta Ng.

Sources say that Elaine had told Etta to take some medication but Etta refused to do so.

Mother and daughter then got into an argument which ended in Elaine allegedly saying, "Since you won't take them, just die!"

Etta then went to the police and reported her mother, accusing her of intimidation, reports JayneStars.com.

After several hours of questioning, Elaine was released from Wan Chai Police Station.

When she reached her flat, she was met with a swarm of reporters.

She dismissed their questions and told them to leave.

Elaine reportedly looked sickly and her eyes were red.

When asked if she had contacted Etta, she quickly replied, "No!"

On Saturday morning she divulged more about the matter:

"It was a typical family spat. Parents being a little too harsh on their kids. I’m still learning."

She added that Etta has calmed down and that she is still staying with Elaine.

When asked if this case is considered criminal intimidation, Elaine replied:

"I don’t know. I need to consult my lawyer. Let’s not make this into a bigger issue."