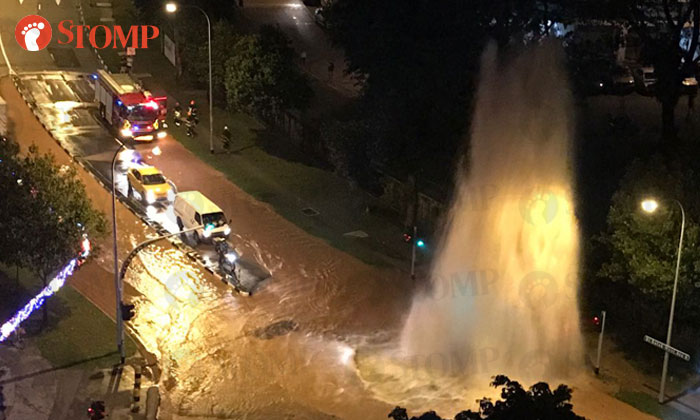 Several Stompers came across what happened and sent us photos and videos of the scene.

The waterspout from the leaking pipe was 'more than three storeys high' judging from the footage we received.

There was a lot of water on the road, but several motorists can still be seen driving past the junction.

The unusual sight also attracted the attention of passersby, who stopped to take photos and videos.

In a Facebook post yesterday at around 11pm, the Public Utilities Board (PUB) said that they have been receiving reports of the burst pipe since 9.53pm.

Their officers and contractors were sent to the scene in response and motorists were advised to take alternative routes. The Singapore Civil Defence Force also dispatched a fire engine.

Stomper Thomas, a civil engineer, was at the junction at around 2am.

He said that there was still a lot of water coming out from the pipe. At that time, the water was clear.

In a telephone interview, he told Stomp that he suspects the burst pipe was caused by ground movement.

Other Stompers had more cheeky reactions to what happened.

At around 4am, the PUB posted an update on Facebook about the incident, saying that repairs were being carried out.

"The leftmost lane along Bukit Batok West Avenue 6 will be cordoned off for repair works to be carried out."