It's Tiger time for these commuters on train and bus 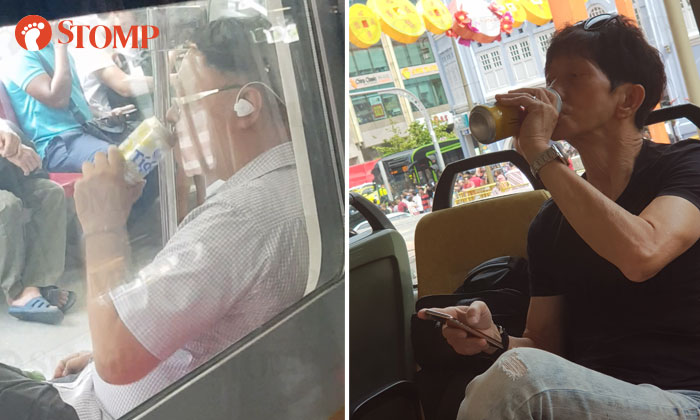 Two men were caught having their own private happy hour on public transport in separate instances on Saturday (Jan 19).

Stomper Ben was riding bus service 51 through Chinatown when he saw a man taking swigs out of what appeared to be a Tiger beer can at about 3.20pm.

"I was looking at him and he was staring back at me," said Ben.

"I wanted to confront him but I was scared as he kept staring at people while drinking his beer.

"When he was done, he crushed the can and put it in his bag."

Stomper Kumar was shocked when he saw another man drinking beer on the platform of Yew Tee MRT Station at about 5.15pm on the same day.

"As the train was approaching the station, I could already see the man drinking his beer,

"After I alighted and he got on the train, I saw him taking more gulps from the can while he was seated."

Kumar told Stomp that he has seen students drinking on the train from time to time but this is the first time he has seen someone enjoying some alcohol.

"If it was mineral water, I would just walk away but he was drinking beer," he said.

"Students and foreigners take our train, what would they think if they saw him doing this?

"They would think there is no problem doing it."

He added that he reported the man to the station's staff before leaving.

Related Stories
Viral video riles up netizens: Guy eats on train, girl fails to stop him
Guy gets a little too comfy during bus ride from Hougang to Sengkang
S'pore mum with 'huge belly' totally ignored on bus: It's different in Taiwan, she says
More About:
beer
drinking
Bus
train
inconsiderate commuters
inconsiderate