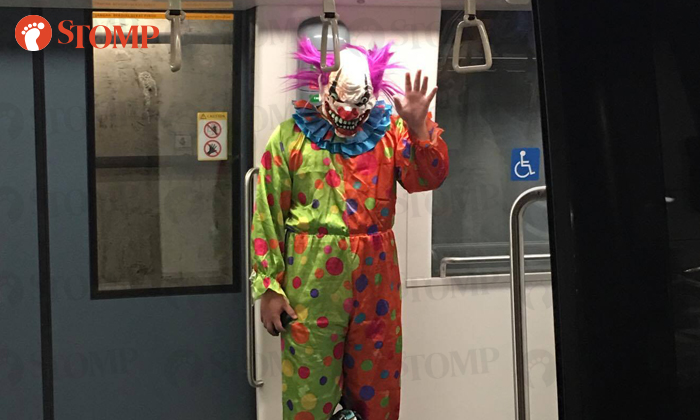 Clowns are in the spotlight this year, thanks to the release of highly-rated horror movie 'IT'.

Based on Stephen King's 1986 novel of the same name, the film stars Bill Skarsgård as Pennywise, a shape-shifting and children-hungry demon that takes on the form of a clown.

Hence, there is little surprise that many people chose to dress up as an evil clown for Halloween 2017.

Take this guy that Stomper Harry saw on the train at the Circle Line's Bishan MRT Station yesterday (Oct 31) at around 4pm.

He was clad in a costume with a frilly collar, had tufts of brightly-coloured hair, and was wearing a wide grin that revealed razor-sharp teeth -- all of which are Pennywise's most prominent traits.

He had chosen to go with a different colour theme, however.

Stomper Harry, who felt amused by the sight, said: "People were taking pictures. Some were shrieking and running to another cabin while giggling away. He definitely caught a fair amount of attention."

Do you celebrate Halloween? What did you dress up as this year?