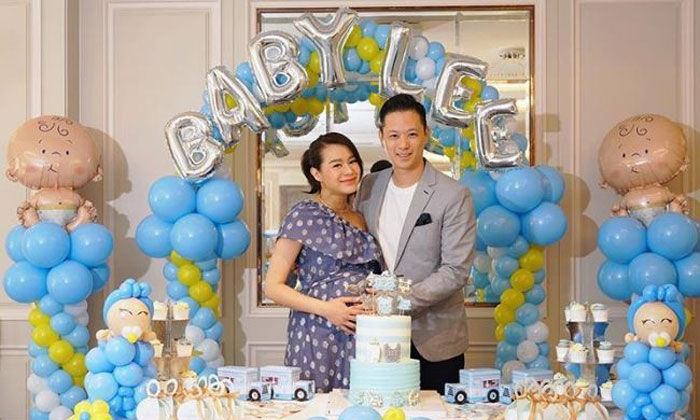 No she's not given birth yet, but Hong Kong actress Myolie Wu has just announced that she's expecting a boy, surprising followers on social media with a live broadcast during her baby shower on Saturday (Sept 23).

The pregnant star is believed to be eight months pregnant, and due to give birth sometime within the next two months, according to reports.

The 37-year-old also confirmed the baby's sex in a post on Instagram, thanking all the guests at her party, which included actresses Sharon Chan, Elaine Yiu and Mandy Wong.

In her post, she also mentioned her enlarged nose, a common pregnancy symptom that has been linked to carrying baby boys, according to old wives' tales.

Wu wrote: "Thank you to all our family and friends for coming to celebrate with us and giving all the lovely gifts to baby Lee, yes it's a boy, I guess my nose really got big because of the hormones! Mummy and Daddy can't wait to meet you my little baby!"

Her husband also made a similar announcement on his social media account, adding: "Baby Lee is so blessed before he is even born!"

In another post which showed off the gifts received at the shower, Lee wrote: "Wow my son has a better and more expensive wardrobe than me. And he isn't even born yet!"

This is the first child for the pair, who got married in December 2015 and announced Wu's pregnancy in May, when she was four months along.