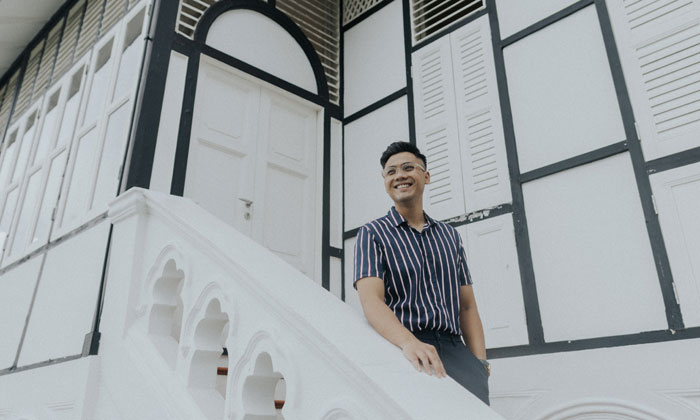 From a young age, Indra lost his parents. Together with his two siblings, he was raised by his grandmother. The family struggled financially. His sister gave up her polytechnic studies to take on a full-time job and make ends meet. Indra also took on different jobs in his secondary school days, ranging from banquet services to retail and cleaning. Lacking parental guidance, he was rebellious and performed poorly in secondary school.

As he grew older, Indra began to realise that he had to turn his life around. However, he did not know where or how to begin. The turning point came during his National Service, when he achieved the “NSF of the Year” Award. This was a huge achievement to him and it showed him that he was capable of more.

He then enrolled in the Nitec in Retail Services course at ITE, where he was determined to do his best. He also took up leadership roles in several CCAs, on top of working part-time to support himself.

With hard work and dedication, Indra excelled in his studies at ITE. He achieved a perfect Grade Point Average (GPA) score of 4.0, and was on the Director’s List in 2019 and 2020.

Through his personal experience with hardship, Indra developed a strong empathy for the less fortunate. It also fuelled his passion to give back to the community and help those in need. During the COVID-19 pandemic, Indra initiated a community service project called Project SG Strong. For this project, he led his peers to purchase and pack more than 140 care packs that were distributed to frontline workers as a gesture of appreciation.

“Every award and recognition I receive is a testimony that I am moving in the right direction. Through my achievements, I hope to be a beacon of hope to those who are going through challenges that I used to face, and inspire them to believe that any adversity can be overcome.”

To fulfil his aspiration of working in the tourism sector, Indra is currently pursuing a Diploma in Tourism & Resort Management at Ngee Ann Polytechnic.

Related Stories
ITE student thrives after switching from Aerospace to Sport Management thanks to his passion for fencing
'Shy guy' pushes beyond his comfort zone to become top ITE Work-Study Diploma graduate
ITE student on the fast track towards turning love for gaming into a career
More About:
ITE