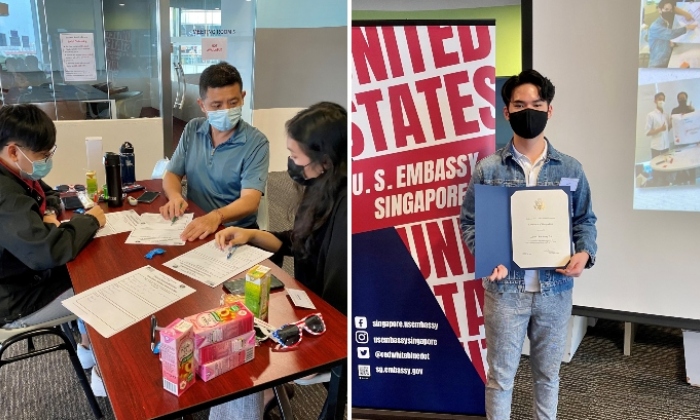 He had found it difficult to manage his work, while sharing a room with his sister who was also working at home.

Aaron regained his motivation thanks to the advice and support of a mentor, Mr Eric Chua, who is now the Parliamentary Secretary of the Ministry of Culture, Community and Youth and Ministry of Social and Family Development.

“He would often check in on me despite his busy schedule, and I really appreciate the effort. He also taught me that it is normal to fail and we can all learn from failure,” said Aaron.

Aaron was one of 40 ITE students who participated in the 2020 U.S. Embassy-ITE Alumni Mentoring Program.

Into its eighth year, the Program pairs ITE students with mentors who are alumni of U.S. government exchange programs such as the Fulbright Program and Young Southeast Asian Leaders Initiative (YSEALI).

It features a series of mentoring sessions, aimed to foster the students’ personal growth. The students also get to hear from representatives of American companies in Singapore, on topics such as innovation and resilience.

Another student who benefited from the Program was Princess Kate Koh Jie Lin. Once fearful of change, she is now more confident about herself and actively steps out of her comfort zone for new learning experiences. These included emceeing at school events.

“The greatest takeaway I had was to not fear change, but instead, embrace change as the key to improving myself,” said Kate.

This year’s Program was launched on 18 January, but was suspended due to the COVID-19 pandemic. It concluded with a full-day event held over two sessions at ITE College Central in October.