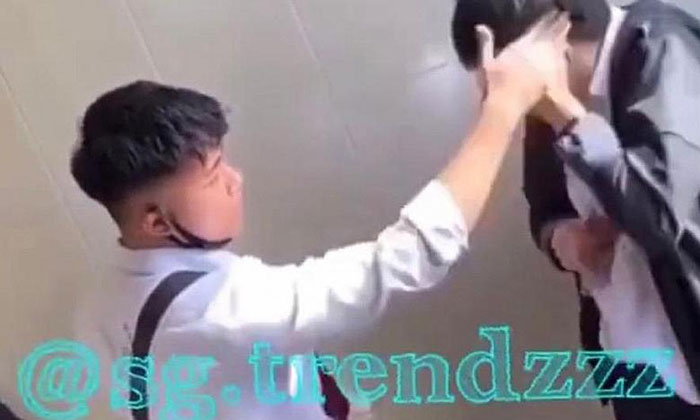 An ITE College Central student has been suspended after a distressing video of another student getting slapped and kicked surfaced on social media.

Footage of the incident, which appears to have been taken by another student, shows the aggressor taunting the student as he corners him to the side.

The aggressor then rips off the student's mask and continually asks him "what's wrong with you".

Laughter can be heard in the background as the aggressor hurls a string of vulgarities at the student, before finally asking him to say "sorry boss".

The aggressor proceeds to hit the student on the head and kicks him in the calf while the latter walks out.

It is unknown when the video was taken.

ITE College Central principal Suresh Natarajan said in a statement that the school is aware of the video of the bullying incident.

"As an educational institution, we strive to provide all our students with a safe, caring and supportive environment. We take a serious view of bullying and take a firm stance against such behaviour," said Mr Suresh.

ITE has identified the students involved in the incident and suspended one of them, pending further investigations.

Mr Suresh added that they have reached out to the victim and his family and extended support to them.

"The college will not hesitate to take disciplinary actions against students found in breach of our code of conduct," he said.

Minister of State for Education, and Social and Family Development Sun Xueling wrote in a Facebook post yesterday that ITE's College Disciplinary Committee is investigating and will recommend appropriate actions.

"Might is not right. It is morally reprehensible to bully someone," she added.

"Even more so, if you pick on a person or child who is in a vulnerable position and unable to defend himself or herself."