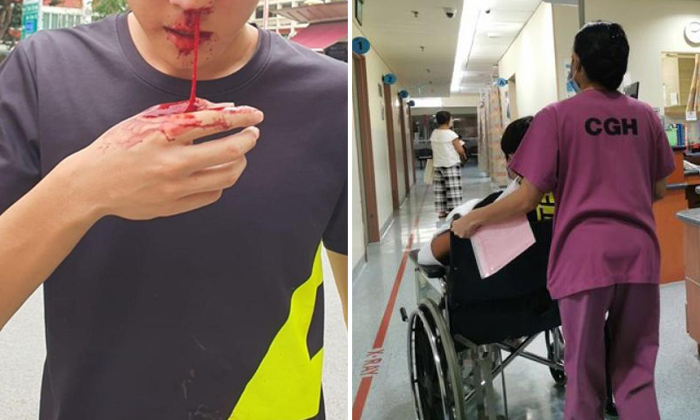 A 17-year-old teenager was allegedly beaten up by a jealous student over a girl.

According to Shin Min Daily News, the incident occurred at a secondary school in eastern Singapore last Wednesday afternoon (Mar 4).

The victim's guardian, known only as Amelia, had posted about the incident on the HardwareZone forum and asked for "real advice" on what to do.

She alleged that an Institute of Technical Education (ITE) student had trespassed into the secondary school and attacked the teenager.

According to Amelia, the teenager did not resist or fight back during the assault.

"He is bleeding like mad in the nose and head damn pain macham blur blur," she wrote.

Amelia said she brought the victim to Changi General Hospital for treatment and went to the police station to lodge a report afterwards.

In her series of posts, Amelia also claimed that the assailant had entered the secondary school with a female student.

Both guys apparently liked the female student, who is reportedly an alumnus of the secondary school, thus leading to the altercation.

The HardWareZone thread appears to have been removed, though a cached version is still available.

In response to media queries, the principal of the secondary school confirmed that a Post-Secondary Education Institution student had lied about his reason for entering the school.

The assailant then trespassed into the secondary school and attacked one of its students, said the principal, adding that the school takes the matter seriously and has made a police report.

He told Shin Min: "We are in touch with the student and his guardian to ensure his well-being, and will continue to provide him with the necessary support."

The principal also said that the safety of students, as well as their physical and mental well-being, are the school's primary considerations.

In addition, the school will review its safety measures to prevent such incidents from happening again.