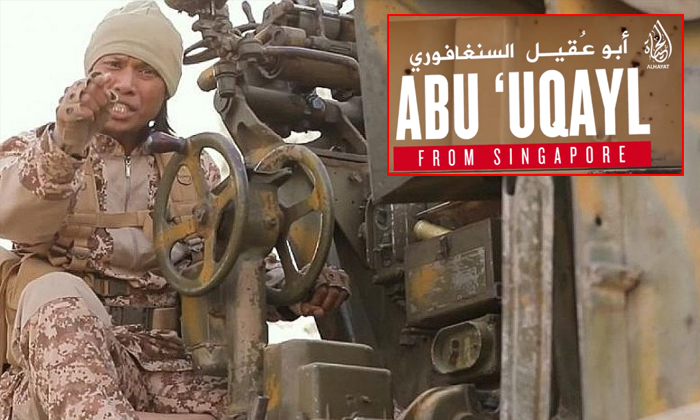 An Islamic State in Iraq and Syria (ISIS) recruitment video featuring a Singaporean fighter in Syria, who now goes by the name of Abu Uqayl, has surfaced on social media.

The Ministry of Home Affairs (MHA)'s Internal Security Department (ISD) identified the man as Megat Shahdan Abdul Samad who left Singapore in 2014 to work in the Middle East.

It is believed that the 39-year-old was radicalised there and subsequently made his way to Syria to join ISIS' ranks.

"He is believed to still be with ISIS in Syria," said MHA in a press release.

In the 3.5 minute clip, Abu Uqay and two other fighters load artillery rounds onto a truck in what is believed to be ISIS-held territory in the Middle East.

Abu Uqay can also be seen firing off a round on a truck-mounted artillery gun, with a caption that said "power is shooting".

Speaking to the camera in English with a Southeast Asian accent, Abu Uqayl praised fighters in "East Asia" and called on them to "sacrifice all that is precious".

He then urged extremists elsewhere to join the East Asian fighters or to travel to the Middle East to fight with ISIS fighters there, reported The Straits Times.

He said: "To Harry, you come to Singapore and tell such stories to gain sympathy for the London terror attacks? Why don't you come here and fight us if you are man enough? So we can send you and your Apaches to hell fire."

It urged anyone who is in contact with him or knows of anyone in touch with him to report it to the authorities and added: "The Government takes a very serious view of anyone who supports, promotes, undertakes or make preparations to undertake armed violence, regardless of how they rationalise such violence, or where the violence takes place."

In response to the "propaganda video", Home Affairs and Law Minister K. Shanmugam said in a Facebook post yesterday (Sep 24) that the "ISD has been aware of Abu Uqay's activities and has talked about him to community leaders".

"We have to think of ways of dealing with radicalisation of Singaporeans, that could take place outside Singapore, particularly in countries where the possibilities of radicalisation are higher," he added.