Is this goodbye to free-ranging chickens in Singapore? 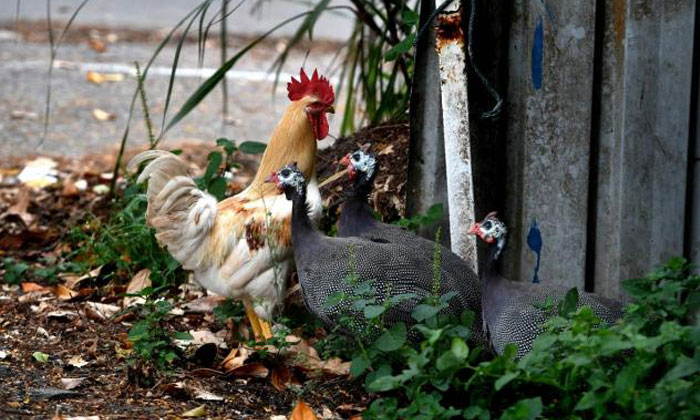 The authorities are planning to cull chickens that are running wild all over Singapore.

The Agri-Food and Veterinary Authority (AVA) said it will take action whenever it receives complaints about noise.

The National Parks Board is also mulling over a similar move, but for a different reason: Concerns that the chickens may interbreed with their endangered ascendants, the native red junglefowl.

The red junglefowl is native to Singapore and is nationally endangered, she added.

On the other hand, said Dr Wee Yeow Chin, founding president of the Nature Society (Singapore), chickens are domesticated birds and have no conservation status.

Dr Wee, who heads the Bird Ecology Study Group, added that with rapid interbreeding, the native species will gradually be reduced and be replaced by hybrids.

Wildlife consultant Subaraj Rajathurai said the hybrids could also encroach on the nature reserves, where they take away native animals' foraging opportunities.

Dr Chan said NParks will be partnering the local conservation community to strengthen the protection of the red junglefowl.

"This includes monitoring the overall red junglefowl distribution and population size, studying the extent of interbreeding and managing the population of free- ranging chickens."

Though they may look similar, the red junglefowl has a number of distinct traits that set it apart from domesticated chickens.

The purebred red junglefowl have grey legs, whereas chickens mostly have yellow legs.

Red junglefowl, unlike chickens, can fly and are also quieter.

Their calls are high-pitched and truncated, whereas roosters - male chickens - have a recognisable call that is louder and longer.

But Dr Wee said: "Contractors should be able to tell the difference between the two and not indiscriminately cull all 'chicken-like' birds."

However, the authorities said purebred red junglefowl are known to occur only on offshore Pulau Ubin and the Western Catchment area.

"To address these, AVA works with NParks to conduct surveillance and control operations to safeguard public health and mitigate nuisance issues," she said.

Last year, AVA received reports from residents of the Pasir Ris and Thomson areas complaining about the noise from free-ranging chickens.

Due to a lack of relocation options in land-scarce Singapore, the chickens will be humanely euthanised, Ms Kwok said.